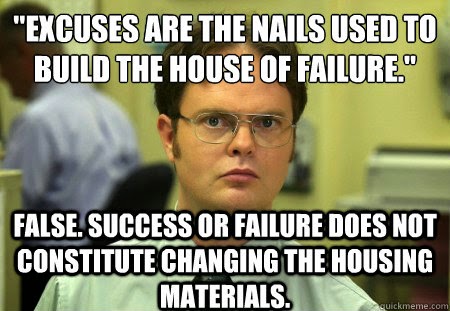 March 6, 2015 – Inspirational Thoughts For The Day: Don’t Use Excuses To Cover Up Failure, Get Up & Try Again

I have a close friend who recently found herself in a long distance relationship.

After over 1 year away from her hubby, the successful business woman has packed up her beauty shop to take care of her only child.

To make matters worse, she has resorted to begging her father to succeed.

So last week, she came for a visit and we had a lengthy discussion.

After a while, I got to know that her only excuse for not pursing her thriving business was that her husband is not around to take care of the baby and that she doesn’t have the time for the biz anymore.

After the discussion, I came to realise that giving excuses is an express way to failure.

No matter what you wanna do, please go ahead and gather strength to do, do not allow excuses to stop you.

My friend was a mother of one and she’s complaining, what should a busy mother of two do?

Here is my take on all of this guys, whatever you plan to achieve in life, do not allow excuses or inconveniences of the moment to stop you.

Excuses have a way of rubbing off on our focus.

Please stay focused and pursue your dreams to success.

Here are some inspirational quotes for the day:

There is always a perfectly good excuse, always a reason not to. The hardest freedom to win is the freedom from one’s excuses. ~Robert Brault

We excuse our sloth under the pretext of difficulty. ~Marcus Fabius Quintilian

Whoever wants to be a judge of human nature should study people’s excuses. ~Hebbel

There is no such thing as a list of reasons. There is either one sufficient reason or a list of excuses. ~Robert Brault

We have more ability than will power, and it is often an excuse to ourselves that we imagine that things are impossible. ~François de la Rochefoucauld

Pessimism is an excuse for not trying and a guarantee to a personal failure. ~Bill Clinton

I attribute my success to this: I never gave or took an excuse. ~Florence Nightingale

Excuses drain you of energy needed for success, stop complaining just do it. ~. NaijaGists.com