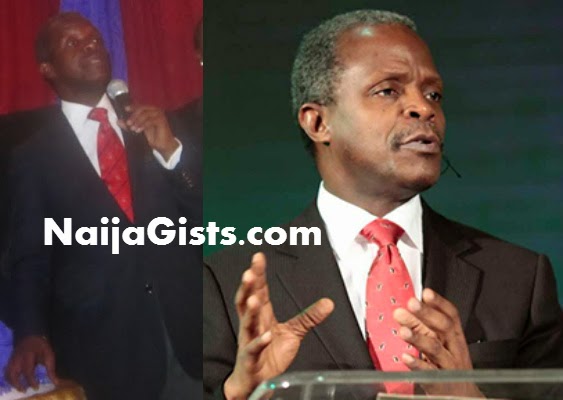 I sat quietly, listening intently to the speaker (sorry, pastor). Soon a wave of distraction hit me. I know this face, I know this man, I thought. Oratory is a normal expectation from a person on the pulpit, so the point was not about the diction, and the smooth flow of the message. It was the face, and attempts to locate it.

Being in the presence of God is not a moment to waste attention on the devil’s antics of distraction so I quickly wrote the question on a piece of paper for a nearby usher.

I had returned to a church I was attending some four years before on Banana Island, Lagos, where I once lived. I felt at home and happy to see the church I had quietly contributed to grow so big. Obviously the pastor had been changed but who was that familiar face I couldn’t place. “Prof Osinbajo,” the usher wrote back. The response came with an overwhelming calmness that sharpened my attentiveness. It remained high throughout the sermon.

If a whole Yemi Osinbajo is serving God in that capacity, who are you to fool around in God’s presence? We haven’t met but Prof is known to many people by reputation.

The questions started pouring as I left the church home. This series is pegged on the fact that to every individual God gives a unique gift. Those who know God add that each “unique gift or talent” comes with responsibility, which include using the gift, nurtured with distinctive resources and opportunities, for the specific things we are called to do as individuals.
Of course, I know Prof’s reputation but I needed the full breadth of it to see him in the prism of gifts and responsibilities. I Googled him last Monday to find this ready-for-use profile used for The Platform forum.

I also got this elsewhere. “Professor Osinbajo has authored, co-authored and edited several books and publications including The Unification and Reform of the Nigerian Criminal Law and Procedure Codes ; Law Development and Administration; The Annotated Civil Procedure rules of The Superior Courts in Nigeria and Cross Examination: A Trial Lawyer’s Most Potent Weapon.

Ha! Now who did God say Prof Osinbajo is? Until the question is put to him, let’s go with what people say: That he is one who has been blessed to be a legal luminary, and has been using those gifts and resultant skills to serve God. He spoke about winning souls even at the United Nations. I also Googled for the qualities of a legal achiever, which could be relevant to pastoral work. They include communication skills, persuasiveness, research and analytical skills, interpersonal skills, and wait for this, reading comprehension skills.

There is something else. There seems to be no shallow part in Nigerian politics; it looks all deep and murky. So for a man, who once lived in the corridors of Nigerian power to serve God this way, he must be committed to the true source of power.

Oh, I forgot to mention the church. It is the Olive Tree Parish of the Redeemed Christian Church of God.