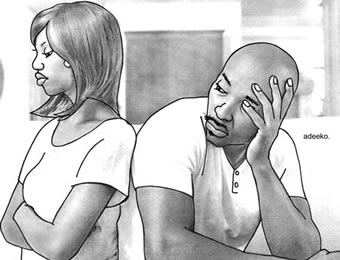 December 11, 2017 – My Wife Is A Party Freak – Hotelier Tells Court As He Seeks Dissolution Of 16 Year Childless Marriage

Mr Oluwafemi Ajadi, a popular hotel in Lagos today asked an Agege Customary Court in Lagos to dissolve his 16- year old marriage to his wife, Chinwe, over threat to life and infidelity.

But Chinwe, 35, amid tears, urged the court not to grant the petitioner’s application on the grounds that she had aborted several pregnancies for him before their union was legalised.

The petitioner, a native of Ibadan in Oyo State, told the court that he was no longer interested in the marriage.

Ajadi, who lives at No. 26, Bamgboye St., Mushin, Lagos, described his wife as arrogant and a trouble

maker.
“My wife is a party freak; I warned her to desist from moving around with bad friends but she did not heed my warning.

“She is not caring and lacks respect for the institution of marriage; please separate us, I can no longer live with her,” he said.

The respondent, who denied the allegations, pleaded with the court to save her marriage.

Chinwe, who hails from Imo, described her husband as a drunk and wife beater.

She alleged that the petitioner beats her at will and abuses her emotionally because she could not conceive.

“My husband usually drinks to stupor and misbehaves and this usually leads to serious misunderstandings between us.

The respondent, who vowed to resist the planned divorce, said: ” l have aborted on several occasions for him before legalising the marriage and have wasted the better part of my life.

“In spite of my husband’s attitude toward me, l still love him and do not want the marriage dissolved,” she said.

Reacting to the court’s plea to him for a change of heart, however, the petitioner urged it not to waste its time in appealing to him, saying he was committed to the dissolution of the union.

“I wasted several millions of naira on the respondent through Invitro fertilization (IVF) but lost the pregnancy due to her stubbornness and nonchalant attitude,’’ he said.

The court’s President, Mrs Ibironke Elabor, who advised the estranged couple to keep the peace, adjourned the suit till Dec. 14 for judgment.

Continue Reading
You may also like...
Related Topics:lagos, party, wife

Photos: Farmer Captures Crocodile In Yale Cross River State, Says It Is An Alligator
Musician To Daddy Freeze: Your Argument On Tithing Is Fruitless, Stop Fighting For God