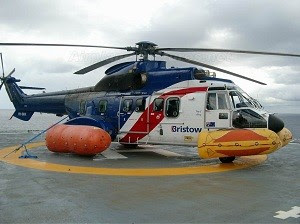 It is official! Bristow is no longer permitted to fly an aircraft in Nigeria.

“On the heels of the Bristow Helicopter’s controlled ditching on Wednesday, February 3, 2016, I consider it expedient to communicate to you certain decisions that the Authority has taken concerning the incident. These decisions are without prejudice to the investigations being conducted by the Accident Investigation Bureau (AIB). As a matter of fact, it will serve to assist the entire process. The Authority will fully support AIB in the investigation. The Nigerian Civil Aviation Authority (NCAA) has therefore decided to suspend the operation of the Bristow Helicopters SikorskyS-76C++ type till further notice”.

In August 2015, several people died after a Bristow Helicopter crashed in Oworonshoki area of Lagos, another happened this week.