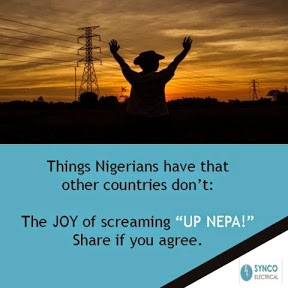 About a decade ago when the privatization ritual was re launched by the then President, the National electric power authority(NEPA), the government agency charged with generation, distribution, and maintenance of power in Nigeria was sold out to what became the power holding company(PHCN) of Nigeria. Unlike NEPA, the PHCN is a private company primarily concerned with profit, how to generate it, and how best to maximize it. It was over a year now since the demise of the erstwhile NEPA which was turned into PHCN just 3 years before its demise. Its epitaph is going to carry something like: born in 1963, meant for Nigerians, and electrified Nigeria.

NEPA tries it best despite the fact that Nigerians never appreciated it. When ever the light is back, you will hear children shouting “NEPA is back”. But still, they tried their best in joining many villages to the national greed. They worked day and. night. They were killed, beaten, discriminated, all in the cause of carrying out their job. They will go to strike ones or twice in five years. Even according to the law, they are prohibited from going on strike. They worked for over eight hours a day. More than the way an average worker will work a day. They don get paid well. Only after two or three months they will receive their monthly salary. No body ever cares about their plight. No body ever join their cause in fight against deliberate corruption, stealing of funds meant for power production and workers welfare, all was beard by them alone.

A lot of money has been spent on the sectors over the years. Over 50 was spent on the sector in 50 years. But up to now, the maximum power production ever achieved was just 5 thousand mega watts. South Africa spent 1 billion dollars in two years to generate 10 thousand mega watts. While Nigeria spent over 16 billion dollars in eight years to generate and maintain 4 thousand five hundred mega watts. This deliberate power failure and corruption in the sector is costing Nigerian economy a lot. It was estimated that about 20 million dollars is lost to domestic power generators and lack of reliable national power supply weekly. This trend has ben going on for over five years now. With the total of just about 50 billion dollars needed to generate over 25 thousand additional power which is enough for Nigerias domestic and industrial uses in just 8 years, the government rather waste those money in corruption and misappropriation.
Now that the PHCN it self is privatized into many regional and states private owned power companies, their quest for profit generation will increase and the dream of seeing Nigeria electrified will die. Places mostly villages that their are no many electricity users will be cut off. Places that have rich people and generate much money will be the only ones to have the light. They will further divide Nigerians along economic lines. They will try bribe the regulators so that they will not regulate and check their excesses. Now that subsidy has been removed, NEPA sold, education expensive and health care totally un affordable, I kept on wondering whether there is any government in Nigeria or we are just living like animals. Even after a year since the privatization of the power conpanies, the light is no where to be found. Ghana is even ridiculing us saying it can transport power to Nigeria if needed. The way Nigerians resisted subsidy with street demonstration, they should have done it with NEPA privatization. Nigeria’s government if allowed, can privatize the Presidency or the country.
All the problem we Nigerians found ourselves is our fault. We not been sincere, truthful and God fearing. We only want to live a comfortable life without struggling for it. We should be resolute about change and how to bring it. We should be our brothers keeper. Tribal and regional sentiments must not be allowed to stand on the way of change and justice. United we stand, divided we fall.