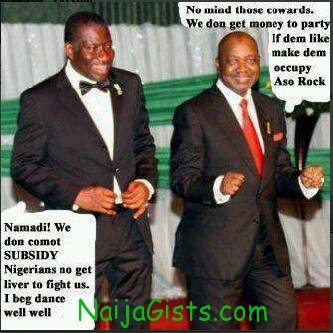 The Federal Government’s unpopular plan to fully remove fuel subsidy is a ticking time bomb that will do nobody any good. The President Goodluck Jonathan administration has always made unpopular decisions which negatively impacted on the lives of the citizenry. Nigerians have been groaning under the yoke of a government many of them think is insensitive to their sufferings.

Since the last fuel price hike in January, the citizens have been undergoing a baptism of fire which has continued to impoverish and dehumanise them. Today, the pains of the ordinary Nigerian have grown and are still growing.

We wonder why Nigeria has to rely on only oil to run her economy in a country where we could as well rely on agriculture, mineral resources different from crude oil in the extractive industry and several other ways of generating revenue to run the rather bloated government.

In a country where three square meals have become a luxury, where so many students have dropped out of school due to the inability of their parents to pay their fees, where people daily die of treatable diseases, where life has become cheap due to insecurity, do we need to make life more difficult by removing subsidy on petroleum products if there was ever a subsidy?

The government of the United States of America continues to subsidise agriculture just like other governments in the developed world try to make life better for their citizens but our government continues to squeeze the people and as the rope tightens, we fear that the oppressed people may be unable to take it anymore. We are afraid that a people punished so much may reach the end of their tether and something terrible could happen.

This administration’s move to squeeze the citizens dry in the name of making the country better may be the last straw. The people have had enough and, God forbid, may snap at the insensitivity of government to their suffering. Life is already on a downward spiral for many and any attempt to further dehumanise the people may not be in the best interest of democracy.

When, in January this year, the prices of petroleum products were increased, Jonathan promised to put in place the Subsidy Reinvestment and Empowerment, SURE, programme. Nigerians thought things may get better, but after that programme failed to materialise, not a few citizens realised that the programme, meant to cushion the effect of the price hike on ordinary Nigerians, was actually programmed to fail.

To brazenly tell Nigerians that fuel subsidy palliatives are no longer possible barely a week after a board was inaugurated for the implementation of the programme exposes the insincerity of the government.

The plan to remove the subsidy on petroleum products in the next few weeks is like destroying the last fabric of humanity in a people so traumatised by the government for the sake of satisfying some agencies created by the developed world to keep us in perpetual servitude.

We wonder why government has refused to address the problems plaguing the country and instead continues to make life more miserable for citizens. We wonder why the government has failed to address the electricity problem which could make a difference; the security challenge; the brazen theft of billions of naira through fuel subsidy and other challenges facing the country.

President Jonathan must have a rethink about removing the remaining subsidy on petroleum products or else the chaos it will precipitate will be difficult to manage.