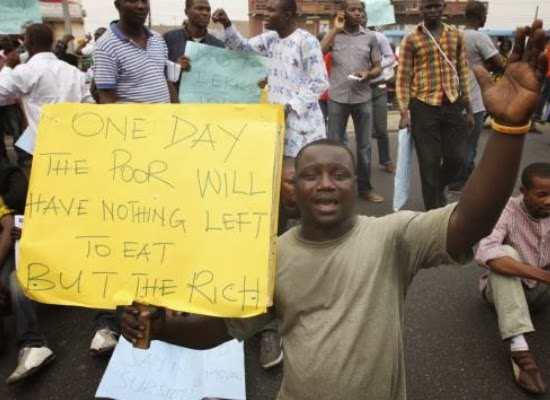 Uncut: Nigeria’s oil minister said in London, October, that the theft of oil revenue needed for national building, amounted to terror. British Prime Minister, David Cameron said at this year’s World economic forum meeting at Davos on January 24th, 2013, that Nigeria earned 100 billion dollars in oil revenue for the year 2012—which is more than all the aid given to the entire Sub-Saharan Africa—but corruption and lack of transparency of the civilian administration denied growth and causes suffering to continue in the nation, with a huge amount of Nigeria’s earned revenue being looted ever before it reaches the nation.

One such “hole” or “massive gap” Cameron referenced that had been uncovered, accounted for the looting over 800 million dollars from oil revenue paid to Nigeria. The British Prime Minister called for global attention to the epic, looting and economic terrorism that is completely destroying Nigeria.

Presidential spokesman Reno Omokri denied these revelations and accusations of the British Premiere, but this link proves: https://www.gov.uk/government/speeches/prime-minister-david-camerons-speech-to-the-world-economic-forum-in-davos. Premium Times on the 12th of November, published startling findings of a 7 billion dollar hole in Nigeria’s oil revenue retrieval, with the NNPC implicated along with Swiss oil dealers. In the report from the Berne Declaration, a Switzerland based anti-corruption NGO (https://www.evb.ch/en/p25021690.html); it was shockingly exposed that Nigeria’s oil was being sold below market price in an elaborate inter-continental scam involving the petroleum ministry and foreign cartels, operating in financial lax Switzerland.

1. Nigeria is the only major producing company that sells 100% of its oil via private intermediaries, thus the nation loses in extra revenue swallowed by the oil baron cabal. These middle men, “brief-case holders” act as “letter boxes” for PEP’s (politically exposed persons) –the well-known and hidden Nigerian cabal.

2. The irresponsible secret calls for tender, a common practice in Nigeria; this of course is a setup between parties to get kickbacks in billions, and sell the nation’s oil at treasonous prices. Most of Nigeria’s oil is marketed through the Switzerland channel. Well known is the multibillion fuel subsidy scam which the ministry of petroleum allowed to fester for years, effectively robbing Nigeria of more than N2 trillion. No one has yet been held accountable for any of these elephantine pilferages.

Nigeria’s minister of the economy, Ngozi Okonjo-Iweala has stubbornly denied that the nation is broke. This is far from the truth and reality on the ground. Multiple sources within all arms of the Federal government acknowledge that Nigeria is broke and unable to take care of it financial obligations to the people. The budget for the fiscal year, 2012 was 5 trillion naira, this is about 30billion dollars. The total revenue earned from oil sales in the same year, according to British Prime Minister David Cameron was 100 billion naira. There is a gross discrepancy in the budget – not inclusive of actual funds disbursed—from the total earnings in oil revenue. This gap can only be accounted for if Nigeria paid in amortization on its foreign debts to the tune of 70 billion dollars.

However in this same period, Nigeria has accumulated greater foreign debts and its 2012 repayment figure was $246,663,000 according to Index mundi. The total foreign debt stands at $6.7 billion. Clearly, foreign debts are not where our massive revenue from oil is going. The government in this period, rather also embarked on schemes to tax the masses via removal of oil subsidies and other schemes to supplement capital for government expenditure. More of such are put out almost every day. But despite increased taxation and levying, there is no money in the economy, as looting has completely drained the nation’s coffer of all wealth. Nigeria’s domestic debts have also been catapulting as the nation awards contracts but cannot afford to pay the contractors.

This domestic debt currently stands at over N6.1 trillion. If not the ASUU strike, then the recent riots over none payment of stipend by Niger Delta Amnesty militants in Russia, highlights the disturbing reality of the broken state of the economy; even pet and prized projects and national security concerns of the administration in which they have the most vested and regional interests can no longer be sustained and funded. Following the money—in this same period of rising domestic and foreign debt, Nigeria is making more and more “businessmen” and oil oligarchs, billionaires in dollars.

Compounding the acute lack of capital in the nation, implicated on looting of oil revenue by collaborations involving the ministry of petroleum with its family of international business stooges and a cartel of oil barons, is an artificial, politically motivated capital constriction. As is a common dirty practice in Nigerian politics, the ruling administration purposefully starves the nation of circulating capital to bring the nation to its knees ahead of elections, with aim to manage the release of this capital through the subservient, to influence votes. This artificial, criminal crisis instigated two years to the next presidential election has created a potentially unrecoverable economic catastrophe.

At the head of Africa’s largest nation’s financial meltdown is the oil minister, one of the president’s , or rather, “Charlie’s angels;” a billionaire or trillionaire, who “owns” Nigeria’s corporate media and senate and remains relatively insulated from proportional castigation and arrest for gross looting of the nation’s oil revenue. A typical case that merits little media attention involves the minister of oil, Diezani Alison-Madukwe and two of her alleged “stooges,” one Jide Omokore and another Kola Aluko. A case of iniquitous misappropriation of over N58.9 trillion naira from the illegal transfer of four oil blocks in favour of Jide Omokore`s ATLANTIC ENERGY DRILLING CONCEPT.

This whopping sum the minister and her coterie are accused of plundering, equals the nation’s total earned oil revenue for four years at the rate of $100bn or 16 trillion/year. The case is being handled by the Senator Emmanuel Paulker-led Committee on Petroleum Upstream. (National Enquirer) These “Diezani boys” who have recently been featuring in the news, command so much wealth, they are reported to be flying around the world in private jets and buying up hundreds of millions of dollars worth of property and boats. Illustrating the authority and audacity and Jide Omokore, he was arrested in France with Nigeria’s presidential jet in November of 2012 (https://saharareporters.com/news-page/french-police-detain-nigerian-private-jet-carrying-president-jonathans-front-man).

What the gross, blatant robbery and misappropriation of Nigeria’s wealth, being stolen before and after it reaches the nation; accounts to is frank terrorism. The nation is on its knees, crippled and begging for international assistance from the ongoing siege. The masses who pay tax and pay fuel subsidies, only for the income to be looted in whole, are what can be termed as “mugus,” “fools,” as also is the nation’s military currently dying, engaged in what the police should have controlled (waging a war against Boko Haram terrorists in the nation’s north eastern borders) while in a role-reversal, the police are occupied in fascist intimidation campaigns, as criminal tools of the presidency.

While the drained military die to clean up the mess of politician and police fatuitous obliquity, the culprits and masterminds behind Boko Haram remain free with impunity, guzzling the nation’s wealth in high offices.
“Tax and Transparency after the G8: Nigeria and Beyond” revealed in London this October that “Nigeria is the only country in the world where illicit financial flows, which it estimated at about 10 percent of GDP, are larger than tax revenues levied outside the natural resources industries.” This means, officially Nigerians pay more tax than minimal looted figures.

Oil pollution in the Niger Delta has already reached levels of irreversible poisoning of the ecological environments. And nothing has been done to check this, as reckless looting of the oil resource is at its highest ever with consequential loss of revenue and dangerous cancer causing morbid pollution. Another form of massive and reckless looting of the recent civilian regimes is in the privatization craze. What one of Nigeria’s cabal who recently part-purchased PHCN (Power assets) coined the term “Africapitalism” to promote. The reality is that these private sector cabal, do not provide alternative and cost effective service to supplement the government failures, but rather they accentuate the failure, then buy the nation’s assets at a tenth of their value to then turn around and offer the service or utility at double or triple the global charges for these. A benefactor of government unregulated oiligopilist service provision, recently referred to the wealth profiteered from the masses as “ritual-like.” This Africapitalism is a grand scheme of extortion of the 160 million masses and sheer robbery. Unless something is done and done fast, Nigeria will never recover from the epidemic looting of its 6th republic.

Some in some quarters clamor for a fractionation of the nation—the size of which may actually be a factor in the impossibility to abate the gargantuan looting—however the next most urgent step for the nation is a Rawlings-style, “bloody” cleaning out and recovery of looted national assets and wealth, or else Nigeria or the fragments of it will never recover from the colossal looting that has been the bane of its 6th republic.

They say that one day the masses will have nothing left to eat but the rich. The day has indeed come.
About the author: Dr. Peregrino Brimah
https://ENDS.ng [Every Nigerian Do Something], Email: drbrimah@ends.ng