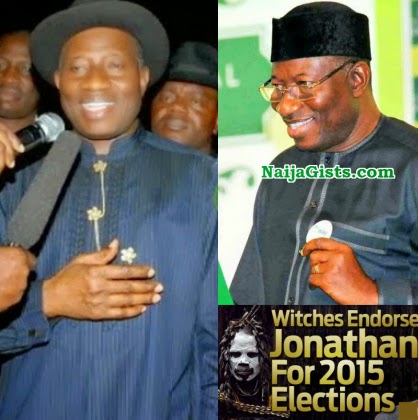 It was just like yesterday when the association of witches and wizards of Nigeria, WITZAN endorsed President Goodluck Jonathan for 2nd term in office. If you missed the report, read it here

As controversial as the endorsement is, President Goodluck Jonathan didn’t dissociate himself from the group.

Days after the endorsement, the group took to the media again to reinstate their support for GEJ yet he didn’t denounce the spiritual attachment.

The controversial endorsement soon reached Christians across Nigeria leaving many of them in doubt as to who their President is.

Rumour soon hit the media that President Goodluck Jonathan is an occultist and that his wife used her fertility to bring goodluck to him, yet the Oga on top didn’t denounce it.

Since then, the occultic stigma has stayed in the mind of most Christians in the South West and Northern Nigeria with many promising to rather vote a Muslim to power instead of having a leader that is associating himself with the occult world.

The moral of the story.

Ladies and gentlemen, whenever someone is spreading rumour about you, please quickly distance yourself from it. It has a way of damaging one’s reputation.

Other factors that contributed to GEJ’s failure include:

In 2011 the vote was considered to be better run but observers said that rigging and fraud still took place.
This time the electoral commission took more steps to prevent rigging, including new biometric voters cards.

GEJ didn’t convince Nigerians that he is capable of handling Boko Haram militant group so many Nigerian dumped him for a retired military man who has better security experience.

(3) Obasanjo’s exit from crumbling PDP
Jonathan’s fall out with Obasanjo forced him out of PDP and that contributed to him losing massively in the South West. Apart from Ekiti state where the election was allegedly rigged with the help of Fayose, Jonathan lost woefully in Ondo, Osun, Oyo, Ogun and Lagos.

Jonathan was blamed for the devaluation of Naira that affected the economy of Nigeria adversely and Nigerians didn’t see it as a reason to re-elect Jonathan.

(5) People are tired of PDP

The ruling party has been in power since 1999 and this year, Nigerians unite to try something new.

Grammatical blunders is forgivable to Nigerians but insulting their elders didn’t go well with some of them especially in the South West.

Mama Peace caused more harm than good to Jonathan with her wrong choice of words during political campaign.

At a time she called her husband a Messiah, most Christian in Nigeria see this as blasphemy.

Buhari will have to prove himself as the man of change he campaigned to be.