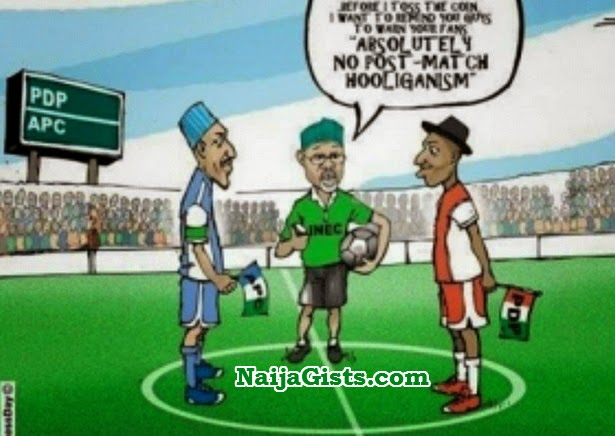 I’ve returned to the theater of dreams where indeed dreams are becoming reality. Its packed to capacity, over 200 million people watching and twice the number watching from their television screens across the world.

Just to keep you abreast with the latest you already know. The first leg of the game is already concluded. Both teams gave their best shot. Team APC, not favorites, turned the table against team PDP. It was a massive victory for team APC. The loss was a fatal one for team PDP whose Team captain and vice captain, Jonathan Goodluck and Sambo are down with a fatal knee ligament injury and spinal cord injury respectively. Jonathan broke his leg after Buhari, team captain of the opposition APC, attacked him from behind brushing him off the ground. His vice captain Sambo also got a back stamping from Osinbajo whose vehement tussle for the ball ensured that Sambo had no chance against the ball, breaking his spinal cord in the process.

Muazu, team coach of the PDP, is currently confused which strategy to apply as his key attackers are out leaving him with the option of replacing them. Who will fit into his formation? Ogueke, team coach of the APC is enjoying the attention he is getting at the moment with the recent victory. He is counting on his formidable formation to wreck even more havoc this second term. His team captain Buhari is urging his teammates to finish the job they had begun.

Muazu is threatening a massive second leg. I can tell you with all certainty the aura that team APC is carrying into this match. Who will win? There is just a few changes to the PDP formation that played and narrowly lossed to the APC. Seriake Dickson and Emmanuel Uduaghan are replacing Jonathan and Sambo, Imoke is replacing Idris Wada, while Akpabio is wearing the captain band in a strategic 4-1-5 formation, a change from the normal 4-4-2 that the team was often known to play with.

APC continues to apply their 2-1-4-3 formation as they hope to consolidate on their first victory. One cannot tell the direction this game will be heading as both sides put finishing touches to their preparations. Pundits are already defining how the game will go though as they hope to see new grounds achieved and some changes from the normal. Will the APC pull another surprise? Or will PDP fight back like an angry dog?

Let’s watch and see.
I have here with me the referee Jega

Ekekere: you will be refereeing today’s match, how do you feel being the referee of this all important duel at a time like this in Nigeria’s history

Jega: (takes a sip of juice) mmh(clears his throat) Ekekere, I feel elated that I’m opportune to stand in as referee at this time in or political history. I hope I’ve being doing a thorough job. You know this refereeing job isn’t always easy, sometimes one can make mistakes and favor one side. Well the favorites lost last time out.

Ekekere: it was clear you did not give Buhari and Osinbajo any cards for their rough tackle on Jonathan and Sambo the last time. Is that not a clear case of favoritism.

Jega: not at all. (looking angry) I was very close to the players when the incident happened. It was actually Jonathan who attacked wrongly. You know Buhari is a former general, that general thing got over him and he replied. I should have given both players red card but I allowed fair play. In the case of Sambo and Osinbajo, you saw it, it was clear, a clear case of a professor against a PhD holder. Why should a mare doctor attack a professor with such ferocity? When the professor replied, you can see his was equal. I decided to be fair in this instant too. Fair play.

Ekekere: we hope for even better from you this time around. Thanks for coming around.

Jega: (smiles) thank you it’s a pleasure. Keep the good work.
That was professor Jega the referee for the encounter. As you’ve heard from him, he is bent on making the game fair for both teams.
Look who we have here, coach Muazu. His face is heavy and he is looking tough

Ekekere: you are welcome, coach

Muazu: (forcing a smile) thank you

Ekekere: tell us what happened in the last game. Rumors carried that you leaked your strategy to the other team. Your players were furious and calling you names.

Muazu: (frowns) that’s not true. A coach of my standing can’t do that. We miscalculated and my players were misfiring. Fayose and Akpabio were able culprits. The refereeing was poor too, you saw it now. We lost our captain and vice to brutal attacks and the referee did nothing to contend that.

Ekekere: that’s pathetic. Having lost the first game, I am certain you are returning for revenge. What are your numerous fans to expect?

Muazu: we are coming out tough, 25 states, 25 states. The other team thinks they can do away with their victory, we will reply. I’ve tasked my players. You know Akpabio is captain today. He has promised me to do all the damage. We have to prepare the ground for our feeders who will take over as this current team retires. Expect a massive game, tiki taka.

Ekekere: thank God I’m in the stadium to watch. I won’t be left out in this. How is your team captain doing?

Muazu: he needs to rest. He has being playing for many years. His wounds have to heal first then we will talk about his returning to the team later. Same with his vice captain.

Ekekere: we’ve not being hearing about your captain’s wife? We’ve really missed her.

Muazu: no! You can’t be missing her now. She actually leaked our team strategy to the opponents by her ramblings. I had to discipline the team and told them to leave their wives at home away from this game. No sleeping with wives or girlfriends till we are victorious.

Ekekere: that’s good to hear. I think that’s necessary. We hope to hear from you at the victory side after the game.

Ekekere: a pleasure
That’s the coach Muazu confirming that his team is all out for a massive duel that is going to see him win 25 states. You heard him right, 25 states.
I have coach Ogueke here too. My interview scouts have being doing a great job this afternoon. Two world class coaches? Keep it up boys.

Ekekere: you are welcome to our pre-match analysis room

Ogueke: Ekekere, thanks. I just saw coach Muazu leaving, he did not reply my greetings. Well, its expected. You are looking fatter than you were before the last game, more money I guess from the other team?

Ekekere: no coach, just had time to rest. You know, the last match wasn’t so easy to cover. I had lost so much of me. Thank God I’m looking better. Yourself, you are looking more confident.

Ogueke: off course, my team is making me proud and I am upbeat about our victory. You know change must come and we will sweep team PDP.

Ekekere: coming to your last victory, let me first of all congratulate you, it was massive. There have being rumors that your team was dubious in their style and you were unnecessarily favored by the referee.

Ogueke: well, that’s the bad press of the other team. We played well and you saw it yourself, the game was fair. Or are you part of the bad press?

Ekekere: no oh! Coach you know how we do it, unbiased reporting.

Ogueke: that’s why I accepted your invitation to appear here

Ekekere: thanks. You are expecting victory right?

Ogueke: off course. We are taking over all the states.

Ekekere: that’s massive. You have pushed the incumbent majority to minority all of a sudden. I’d like to know your secret.

Ogueke: that will be for another time. Not on air with the game at hand. My players are rearing to go. The team captain and vice are seriously motivated. We are unstoppable.

Ekekere: I see. We hope to hear from you after the match.
Ogueke: thanks Ekekere. It’s always a pleasure. Change Nigeria! Change me!! Change you!!!

Ekekere: I pray it’s an upward change oh. Thanks a lot for coming around.
While we await kick off of this game, let’s play you an interview I had with the injured team captain of team PDP at his Otuoke residence.

Ekekere: (sad) Nigerians are sad that you got this injury that will not allow them see you play again at the theatre of dreams.
Jonathan: that’s life oh, my brother.

Ekekere: it’s sad the referee Jega did give a card for the offence. Buhari was brutal
Jonathan: it’s past. I just hope this injury will go soon

Ekekere: how long has the doctor said the injury will last?
Jonathan: just four years
Ekekere: isn’t that too long?
Jonathan: I hope the injury heals before then though. Pastors have being praying earnestly

Ekekere: I am praying along too.
Jonathan: thanks
madame jonathan walks in

Ekekere: madame, you are here already
patience: na only me waka come?

Ekekere yes oh, na only you. Make I dey go. It is well, mmh. Nigerians dey hail ona. Doh. Mmh
It’s going to be unusually hot across Nigeria as the gubernatorial elections arrive. Whichever side wins, let’s watch the game. Catch you at the other end of victory or loss.