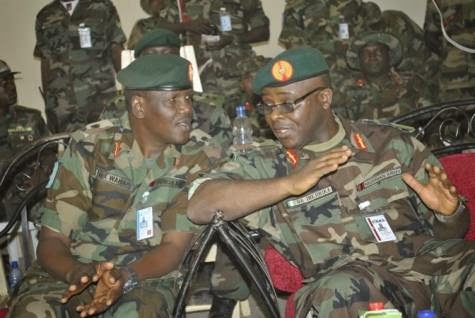 It is important to recognize as the cases against General Azubuike Ihejririka and in effect the head of the Nigerian government are again laid out, that the army Chief occupied his office and executed his duty illegally for the entire 4 years, as his appointment was never approved by the Nigerian senate. He was thus sacked by President Jonathan under a court order of July of 2013. After Attorney Festus Keyamo’s court victory the Attorney gave the gave the President of Nigeria a two week ultimatum to fire the illegally in office army Chief. This by itself is treasonable and acts in sabotage of the Nigerian State.

Firstly, the Baga massacre by the Nigerian army of April 2013 in which up to 200 civilians were burned by weapons of the Nigerian army in uncontrolled reaction to terror while assisting the genocidal mission of the terrorists, remains un-addressed. General Azubuike Ihejirika must be full held to account for the events of that fateful date which amount to crimes against humanity and terrorism of the people of Nigeria’s north. In line with this photo-publicized atrocity, the numerous violations reported by global human right groups which have included summarily executions of hundreds to thousands of Nigerians, of note the execution of suspected terrorists in mass graves after the Giwa barracks break; are all potential crimes against humanity and globally witnesses acts of terror that demand the immediate restriction of movement and investigation of the former and current heads of the army for terrorism and crimes against the people of north Nigeria.

A lack of military response for hours to days after alerts were clearly given by schools and villages of Boko Haram attacks; constitutes failure to protect the citizenry with means given by the Nigerian State and are potential acts of treason and punishable Crimes against the people resident in the nation’s north.

The currently witnessed multiple cases of the charging of Nigerian soldiers and sentencing them for various offences, from absconding to sabotage of the mission against terror, illustrates the expected behavior of a competent military. The well known fact that for the entire 4 years of General Azubuike Ihejirika’s reign, not a single army officer was tried and sentenced in spite of serial cases of demonstrated dereliction, abandonment of position and release/transfer of arms, ammunition and military vehicles to Boko Haram, makes the General complicit in terror and culpable of crimes against humanity.

As charged by the United States in strong and informed accusations levied by US Ambassador to Nigeria, James Entwistle directly to Nigeria’s President, Goodluck Ebele Jonathan in September of this year, the army General stands accused of subverting billions of dollars funds for the kitting of the Nigerian army. This embezzlement of funds directly led to the deplorable state of the army and the deadly lack of capacity and motivation to quell the Boko Haram menace that has now become a full blown occupation of much of the northeast of Nigeria.

Along with the current Chief of Defense, Air Marshal Alex Badeh, who stands guilty of sabotage and treason against the Nigerian State for his cooperation with terrorists by declaring an unfounded and deadly cessation of fire to assist the terrorists capture territory and harm Nigerian life; both army Chiefs have directly and indirectly supported Boko Haram terror by indefensible dereliction of duty, failure to execute sworn obligations to the Nigerian State and subversion of resource for the arming of the military and protection of the populace.

There must be standards in Nigeria and as the army commanders and lower level officers are facing tribunals and being sentenced to death for their offenses, so also must the Nigerian army Cheifs, past and current be tried for the numerous globally recognized crimes against humanity and their accused acts of terror against nation.