The carelessness of a couple based in Awka Anambra state has landed a 7-year-old girl in hospital.

The girl named An Mmesoma was today beaten and tortured with an electronic wire after her parents caught her watching pornographic movie.

When her parents caught her in the act, she was beaten mercilessly. She was later rescued after a Good Samarithan who was chased away from the couple’s home while trying to rescue her informed residents of Nise town in Awka South LGA of Anambra state. The girl was later rushed to the hospital.

This was revealed by a social media user Mr Gbenga Ebuka.

See his update and photos of the girl below 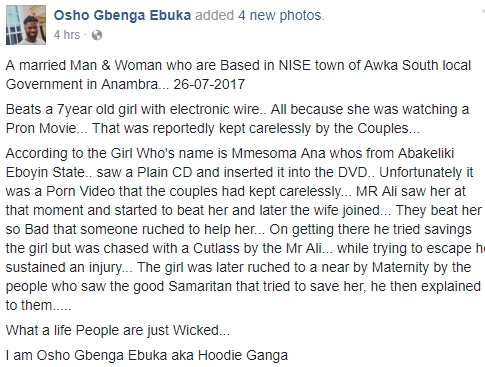 Parents need to keep in mind that kids of nowadays are curious. Why keep such a thing within the reach of a child? the parents too are at fault.