May 21, 2014 – Nigerian Government Ranked Worst In The World For Corruption, Poverty & Terror

The Jos bombings of Tuesday, May 20th, 2014 which claimed more than 200 lives according to latest counts, have pushed Nigeria to formally occupy the first position in the ranking of world nations with the worst governments in history. 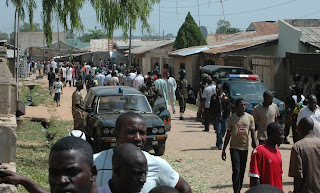 Other criteria which recently moved Nigeria up the list include:

Corruption: With Nigeria’s leadership admitting that they could not account for up to or more than $20 billion dollars oil revenue earnings discovered missing in a single 18 month period examined; the nation’s finance minister admitting this to BBC and the official government engagement of Pricewater house international firm further confirming this financial mishap, Nigeria secured its position as the most haplessly corrupt nation in the post world war history of the world.

Poverty: The rebasing of Nigeria’s economy, setting Nigeria as the largest economy in Africa, while revealing the true economic position of Africa’s largest nation, simultaneously recertified Nigeria as the nation in the top position for worst leadership in social welfare and opportunities for the people. With 70% of the nation living under a-dollar-a-day, economically factored, Nigeria has the poorest people of any nation in the world today. With the rebased economy rating, Nigeria has the most unparalleled HDI (Human Development Index) to revenue and economy ratio of all nations. Poorest people in the Nigeria case, is derived from or correlates with poorest leadership.

Pollution: Despite new technologies of oil exploration, like fracking, pushing some ‘developed’ nations further down the chart due to increasing confirmed cases of drilling-related health hazards, Nigeria has secured its position as having the most polluted shore-line in the world, thanks to serial worst administrations. Gas flaring continues in Nigeria till date. Bayelsa state which currently reports 40 oil spills per month established itself as the most polluted piece of land on the earth in post world war history, approximating Hiroshima and Nagasaki and more recently Fukushima, in proportion of catastrophe. Nigeria ties with Japan as the two nations with the greatest levels of ecological pollution, though in terms of leadership attribution, Nigeria maintained the top spot.

Terror: Nigeria in 2014 reported the most dangerous events of high sea piracy in the world. Nigeria in the end of 2013 and 2014 surpassed Mexico in kidnapping, recording the cruelest and second highest single abduction event in recent history. In the end of 2013 and the first quarter of 2014, Nigeria surpassed Syria, Libya, Iraq and Central African Republic, CAR in worst and most deadly acts of terrorism and sectarian violence. The Nyanya bombing was ranked the fifth worst bombing of its kind in world history post 1970 by the Mineta Transportation Institute (MTI). The Jos bombing with over 200 reported dead in one attack, is second only to 9/11 and the disputed Syria chemical weapons attack. In combined values, with between 40-80,000 killed in the four years of largely unchecked Boko Haram violence, with over 4000 killed in the first quarter of 2014 alone, Nigeria has fast outpaced the world in deadly terror. Nigeria’s leadership in December of 2013 secured the world top position in insecurity and failure to protect life and discourage terror. Current rankings put Nigeria’s leadership second only to Hitler after surpassing Saddam Hussein, in the current century in terms of deliberate and government supervised internal wastage of life.