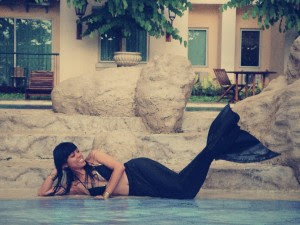 Read this true life story of a Nairaland forum user, Wisdom guy who had an unholy interaction with a suspected agent of darkness few hours to Christmas and how God saved him.

This is a true story of an unforgettable near death experience I had on the night of 24th December, 2015 that changed my life forever. I decided to share this story here not because I want you to castigate me for my act (you can’t castigate me more than I have castigate myself), but because I believe a lot of people will learn from it and thereby avoid the pitfall in the coming 2016.

It all began when I attended the night church service held in my village. I came a little late so I wasn’t opportune to get a seat. I had to stand up for the mass. After standing in the cold for about an hour, my legs began to shiver, I decided to walk toward the church gate and back to stretch my near stiffed knees.

As I got to the gate, I stood for a while and then turn around to walk back when I heard a female voice from the dark corner of the gate; she said, “it’s boring right? “. I walked toward her to get a clear view of who was talking; I saw a light skin girl sitting on a small flower pavement. I asked her “what’s boring?”. “The service , the night, everything” She replied.

It was obvious she wanted us to have a conversation, so I quickly sat down beside her…

To cut the story short, from our little conversation I got to know that her name is Aderoke, her father is from Ogun state while her mother is from my village. She was born and brought up in lagos and can’t speak or understand Igbo language (meanwhile the service was coordinate in igbo language). This was few things I was able to get from her before she told me she was shivering due to the cold. As a sharp guy i reasoned she wanted me to cuddle her, so I told her to draw closer so I can hold her. Without hesitation she moved closer and placed her head on my shoulder while I placed my hand around her waist.

Everything went so fast, before I could say “bingo!” We were already into deep romance: kissing and groping. In the climax of it all she held me and whisper in my ear “sex me please”. As I look around for a more hidden corner, a part of me was persuading me to control my urge that she could be an agent of darkness sent to destroy me, and another part of me was telling me not to lose the opportunity that she’s just a lonely girl in need of some fun. I fell for the latter. I got a more hidden corner were we began to have it; first she bend low while I got on her back ; after awhile she suggested I sit on a pavement there while she climb on top.

Few minutes afterward, I felt a sudden sharp pain on my butt, I thought it was an ant or something similar, but the pain grew bigger. With a trembling voice I told her to stop and get down that I think something bit me, but she was so carried aways that she couldn’t hear me out. As the pain kept increasing, I had to push her out of me. I stood up, flash my phone touch in the pavement and there was a long big snake rowed up. The strange girl screamed and ran away. By then I was already feeling dizzy and fainting, I managed to pull myself back into the church premises and disclose to someone that I have been bitten by a snake after which I lost conscious of myself. I heard I was even fuming from the mouth.

After 2 days of serious traditional treatment, I regained consciousness. When I was asked to explain how I got bitten by a snake in the church, I didn’t know what to say. I can’t believe I nearly lost my life because of a few minutes romp with a total stranger, it’s a very shameful thing to tell your family. The only person i finally told the true of what transpired was a man of God; whom after praying, disclosed to me that the strange girl has a jealous spiritual husband who is a serpent. So the snake that bit me wasn’t ordinary.

I believe God gave me a second chance for a reason. And I have sworn never to continue my careless lifestyle, I have given my life to God and anything premarital sex is not for me anymore. I know it’s not easy to overcome temptation of premarital s*x, but I believe with pray and determination we can overcome anything.

Join me and thank God for my life, and at the same time learn from my story. For the sake of your family and loved ones, stop living a careless life. Stop sleeping around with strangers, so many people knowingly or unknowingly have spiritual spouse, some of who are viciously jealous. Sex is sweet, but life is sweeter.

Try and live a safe life in 2016. I pray God see us all through in Jesus name: Amen!