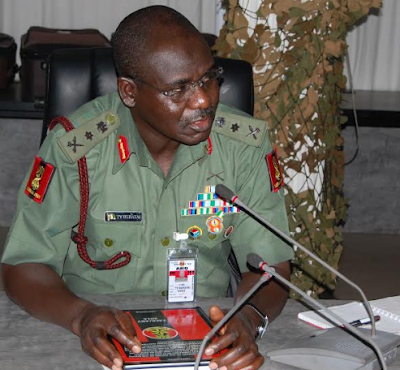 The Nigerian Army have begun an internal search for soldiers and officers suspected to be engaging in political meetings, a top military source has revealed.

The source told Sunday Punch that some arrests may have been made, but that the information was being kept as top secret so as not to add to the public tension.

Some other sources who spoke to our correspondent on Saturday also noted that the establishment of an army unit in Daura, Katsina State, on Friday, named Muhammadu Buhari Forward Operation Base, by the Chief of Army Staff, Lt. Gen. Tukur Buratai, was an effort to fortify the president’s hometown and a public pledge of loyalty.

On Tuesday, Buratai, in a tense language, had warned officers and soldiers to steer clear of politics, as information had reached him that some officers were involved in political meetings for “undisclosed reasons.”

The army chief had advised officers and soldiers interested in politicking to resign from the service, as any officer caught would be severely penalized.

Three days after the alert (Friday), Buratai went to Daura, where he inaugurated the army unit, and paid a courtesy call on the Emir of Daura, Dr Faruk Umar.

The details of the meeting have yet to be known.

The army chief, at the ceremony, had said the establishment of the unit was to enhance security in parts of 1 Division, which Daura town fell under.

Also, the Director, Army Public Relations, Brig. Gen. Sani Usman, said, “The establishment of the new unit was part of the implementation of the Nigerian Army approved Order of Battle 2016 (ORBAT 2016) by the Army council.

“Prior to that, the COAS was also at the Palace of his Royal Highness, Alhaji Faruk Umar, the Emir of Daura, for a courtesy call.”

The top army source said the army knew quite well the weight of its statement on politicking soldiers in the country and had already followed up with high intelligence-driven search, adding that the public groups and civil societies could not be more rigorous than the army.

Other sources told our correspondent that some of the suspected political meetings were held under the guise of some of the recently redeployed 147 soldiers and officers, allegedly trying to familiarize with their new hosts.

When contacted on the measures the army was taking on the alert of soldiers hobnobbing with politicians, the army spokesman, Usman, said the army was a professional service, and would not hesitate to brief the public if it considered the information as necessary.

He said, “The army is a disciplined and professional service. We relate well with the Nigerian public. When there is need to disclose information, we will.”

Security has also been beefed up at the Federal Capital, Abuja to prevent any unrest. Federal Capital Territory (FCT) officials, it was learnt, have been holding meetings keep it safe from any attack.