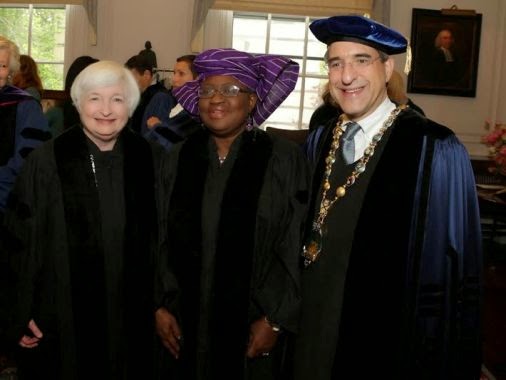 This is an open letter written by a Nigerian to Yale University over the honorary doctorate degree the prestigious institution awarded her on the 15th of May 2015.

“Ngozi Okonjo-Iweala, Doctor of Humane Letters. You are a citizen of your country, your continent, and the world. Shaped by challenging experiences during your childhood in Nigeria, you have made social and economic reform your mission.

As Nigeria’s coordinating minister of economic development and minister of finance, you have tackled corruption, created a vision and path to long-term economic stability, and worked to build a culture of transparency. At the World Bank, you made food security a priority and provided policy advice and capital for the world’s poorest countries. With wisdom, a fierce dedication to doing what is right, and unflagging energy, you have transformed the economic landscape of your nation. We are proud to name you Doctor of Humane Letter”.

There is no tangible evidence of any economic development in Nigeria under the leadership of Ngozi Iweala in all reality. Nigeria’s economy is still an oil-dependent economy that is debt and borrowing ridden as well as 100% consuming and importing in nature. Nigeria’s debt profile has risen rapidly under Ngozi Iweala and Nigeria has borrowed over $2 billion in the last four months alone to pay salaries of the federal and state civil servants.

Our foreign reserves and excess crude oil accounts have both depleted heavily under Ngozi Iweala. The recurrent expenditures in the federal budgets reached the highest levels which made capital development practically impossible in Nigeria under Ngozi Iweala. The board of regents of this ivy league school missed it completely by awarding their prestigious honorary doctorate degree to an undeserving Nigerian in all truth, honesty and reality.

The Nigeria’s economy has remained the same under Ngozi Iweala without any evidence of its diversity from oil. The Nigerian Naira crashed to its lowest value in its history under Ngozi Iweala. The true picture that Yale University missed is the fact that the economy of Nigeria has almost grounded to its final halt today which will makes its a daunting task for the incoming administration of General Muhammadu Buhari to meet its campaign promises.

The menace of official corruption and financial scandals have both reached their peaks in Nigeria under Ngozi Iweala. A central bank governor was fired for disclosing that $20 billion was missing from the federal coffers and this allegation was investigated in a shady and questionable manner. The oil subsidy scam that cheated Nigeria’s tax payers of trillions of Naira was coordinated and supervised by Ngozi Iweala. The culture of official corruption and state resource mismanagement were both honored, celebrated, protected and defended under the leadership of Ngozi Iweala as the supervising coordinator of the Nigerian economy.

To give a honorary doctorate degree to an undeserving Nigerian by this world’s reknown university is the biggest slap on the faces of the 180 million Nigerians in 2015. I am using this social medium to appeal to the board of regents of this prestigious university to withdraw this honorary degree that they awarded to this Nigerian immediately and without any further delay for the sake of posterity.