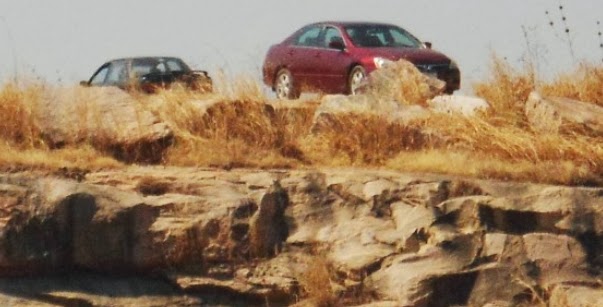 Popular politicians in Nigeria are leaving no stone unturned in their bid to get political positions in the upcoming 2015 general elections. Politicians from all walks of life are now trooping daily to a prophet on a mountain in Kaduna to seek power to win elections. They go to the mountain at dusk under the cover of night for prayers and blessings for smooth sail in the general elections, leaving at dawn after a hectic all-night prayer session.

The holy mountain, located off Patrick Ibrahim Yakowa Way in the Eastern flank of Kaduna metropolis, is a beehive of activities, particularly on Fridays when people go there to seek deliverance during vigil. This much was disclosed by the General Overseer of Christ’s Vision Ministries, Rev Samuel Taiwo Deji, who told Saturday Sun in a chat that he has so far spent three years, living on the mountain, all alone as directed by God to deliver and heal people who are suffering from one problem or the other. Reverend Deji, 59, who is a Professor of theology in Christian education, said he decided to name the mountain, Jesus Mountain, “because nobody comes here without receiving one miracle or the other”.

According to the Ekiti State- born man of God: “Politicians from every part of the country come to me on this mountain; they keep vigil here, praying to God for blessings in the next elections and other blessings in their lives. “They normally leave at dawn after the vigil, and I have assured them that their prayers have been answered by God, but warned them that political party differences will cause bias against the commoners, and, therefore, they should work for the sole interest of the common people and the unity of the country. “I always encourage politicians to come here for deliverance because all of them are under heavy spiritual attack. In fact, I advise that President Goodluck Jonathan, even the American President, Barack Obama should come to this mountain for prayers, and they will meet the Lord.

“I am not a prophet of doom, so I cannot say that 2015 elections will be bloody, and interestingly enough, God has not revealed it to me that it will be bloody. If God has revealed to anybody that the election will be bloody, my duty here on the mountain is to cancel such looming doom in the name of Jesus”. However, speaking with an aura of confidence and total belief in the efficacy of his prayers and visions, Prophet Deji, who is married with seven children, said the first one year he stayed on the mountain, he was tormented by wild animals, particularly lions and snakes.

He, however, disclosed that like the biblical Daniel in the lion’s den, he was never hurt by any of the wild animals, adding that on several occasions, scorpions have invaded his resting place, a container, on the mountain. Apart, from the menace of reptiles and wild animals, he said hoodlums also invaded the place each time he was away, carting away some of his personal belongings in the day time.

“I want to tell you that I have so far spent three years on this mountain, but the first one year was full of challenges, a lion confronted me here, focusing its eyes on me as if it is halogen light, it walked away. I don’t have gun, God is my gun. “Also, snakes, scorpions and other reptiles entered my resting place and clothes, but they did not harm me. “Apart from these animals, sometimes bad boys whom I will call hoodlums come here to loot my resting place, remove my valuables like mattress, handsets among other things. But may God forgive them for they do not know what they are doing.”

At the time of having this interview with the prophet, our correspondent met some people who came for deliverance as well as to appreciate the man of God for the efficacy of his visions and prayers. One of them, Adebiyi Salami said: “I was down with unidentified illness and I had been to several hospitals, no solution, I couldn’t drive my car. But when I came to the mountain, I was healed, I can now drive my car.

This is why I have come to appreciate the prophet”. For Martha Emmanuel, a mother of a child, “the prophet sees vision very well, his prayers are working, and he healed my child of headache with just a handkerchief”. Another worshipper, Charity Bature said: “This is my second week that I have been coming to the mountain. I am no longer worried about my problems because God has assured me through the man of God that my problems are over. I used to be too worried, but I am now relaxed”. John Toluwalase said: “God has been able to deliver me from a lot of challenges since I have been visiting the man of God on this mountain.”