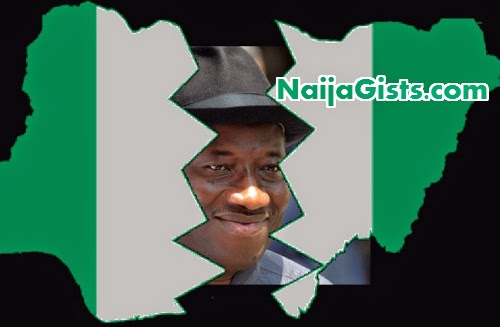 It is highly pathetic that so called men of God that are meant to protect the poor are busy protecting their own interest despite the level of atrocities that is being committed by the government of the day. There has been glaring cases of missing billions, lack of infrastructural development, intangible development of our youths, also lack of employment to mention a few.

Christians, it is evident that your so called shepherds are deserting you, their own flock to fight your own battle. I am Christian, but would not descend so low to allow these so called men of who are part of the growing hardship in Nigeria. They use religion to feed their pocket, taking the little that we have to add to their billions and now endorsing a man that has completely destroyed Nigeria during his 6 year rule. The present administration is the beginning of the destruction of Nigeria. We are just started if we vote him in again.

Don’t allow your Shepherds who are busy equipping their pocket with hard earn currency allocated to them by Bother Jonny destroy the future that we have little or nothing left of. They do not feel the pain a common man on the street is feeling? How will they feel the pain of common on the street when they are busy flying their private jet that is even hovering noise over the common man on the street. Your men of God’s life is accomplished; they are not suffering your pain. They have hundreds of errand men at their disposal that would labour for them, what do you have to show for your dedication to their service. Don’t be deceived, don’t be the dullard that would be control in the name of God, ask questions. Jesus followers asked him question of which he answered mildly and kindly. Ask your men of God to tell you what will change under Brother Jonny aside from keeping us from OIC. What is the detrimental value of being in OIC or not if not a religious sentiments to divert the point at hand. How can they be so blinded to the situation of their own flocks who are struggling to survive? The plight of an ordinary man on the street that is hungry and angry.

The Kidnappers who have created employment for themselves by kidnapping people who either survive or don’t. To the plights of millions of people who are unemployed and roaming the street for God knows what, to the plight of people who are killing their own family for money rituals. To the daily anger of people abroad who cannot return to Nigeria due to poor security, lack of Job, poor infrastructure, for how long, I ask these men of God that they have to sacrifice the life of people for their own interest. God is watching us all and Judgement day is coming. I know a lot of Christians whose sense of reasoning have been contaminated will challenge and oppose my writing but then think about the future of your children, born and unborn. Reflect deeply, and think about what will become of your beloved country in the hands of brother Jonny. A lay man that does not know economics need not be told that the country is bleeding blood.
I can only imagine that southwest would be faced with the same nonchalant attitude of Brother Jonny if we are to witness the same bloodbath that the north is witnessing today. How come the men of God did not come together and pray for every Nigerians irrespective of where they are from, their religion that God should protect and shield them from Boko Haram. How come they have not prayed for peace of God in the north, How come they have not pray for God to touch the heart of Boko Haram?

How come they have not pray for God to arrest the heart of Boko Haram and let them surrender as they are embedded with flowing anointing? How come they have not pray for the life of common man on the street to change for the better? Yet, as churches are growing, more life is being destroyed and more people are leaving church to participate in evil, WHY? We are living in a failing society that has been failed by everybody who is supposed to redeem us. Jesus Preached love and kindness irrespective of religion and race. What are we preaching? Missionaries even left their comfort zone to preach and show us love, kindness and humanity irrespective of race and religion. Yet, our men of God failed to live by all these examples. They preach against anything as long as it would not favour them. How come every single Nigerians is full of selfishness? When will all these stop and we live to extend and show love to everyone irrespective of their religion and race. Can we now say our religious leaders are racist and religious fallacy?

For the men of God’s information, God has also spoken to me and showed me that Nigeria will cease to exist under my dear Brother Jonny. God will stop answering our prayers if Brother Johnny is re-elected because he is not working for the masses. He is working for very few Nigeria who are busy looting the country’s wealth. Brother Jonny does not care about me and you. He only cares about destroying the country and making it difficult for an ordinary man.

These were the same Shepherds that endorsed him in the in 2011, telling us he is the messiah that would deliver us from poverty and improve our situation. How come the same God that beckoned to them then, blinded their vision so see the suffering that we will become of the ordinary masses despite claiming God told them he is the messiah?

Sentiments aside, We all follow Christian way of life because of the example laid down by Jesus Christ, How many of these so called men of call are living example of how Jesus Lived his life. They are acquiring wealth at our disposal and yet we still listen to them and follow their words. Please my fellow sisters and brothers, fight for yourself with your vote, don’t be brainwashed. Use your vote wisely, to send a message home to every aspiring leader that if you did not treat us right by not fulfilling your electorate promise, you will be voted out office.

If not, we will continue to witness the great atrocities that are currently clouding a once giant country.