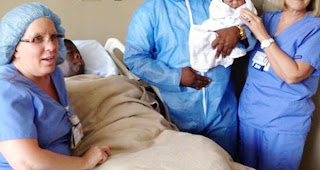 See miracle in action. 8 years after, wife of the GO of Omega Power Ministries, Port-Harcourt Rivers State, Evangelist (Dr) Nkechi Chinyere, has finally given birth to a bouncing baby girl.

Her conception and delivery have been described as miraculous by medical experts after she was diagnosed to be without a womb few years ago.

The baby arrived on Tuesday July, 23 around 10:10am in far -away Dallas in the United States of America,weighing 10 LBS and recorded as the heaviest child of the day in the hospital.

The baby is due in Nigeria anytime from now ahead of her dedication at the church’s headquarters on October 27.

The dedication will coincide with the Church’s 7th anniversary and Chinyere’s 40th birthday celebration.

He expressed delight for surviving the insults of his elder sister who taunted him after discovering his wife’s medical status.

Two years after marriage without conception, Chinyere recalled his wife became worried, making him to direct his elder sister to accompany her to an undisclosed hospital in Port Harcourt GRA for examination.

She was pronounced without womb and declared incapable of conception, let alone delivery of baby, Chinyere remembered.

Armed with the vital information, he said his elder sister resorted to smear his wife’s name, even in the Church, taunting her as a man.

Chinyere said: “Today, Doctor Jesus has remembered me and my wife and also rolled away the shame and forever silenced our adversaries.”

The Church’s founder thanked God for demonstrating His power and sovereignty over the ministry once again.

Recounting the success story of the Church, he said only God could have helped a church that is just seven to establish 82 branches within and outside Nigeria with over 300,000 members.

He attributed the giant strides to God, his simplicity and willingness to follow divine leading.

There is nothing impossible for God to do.

[Report by Sunday Oguntola, The Nation]