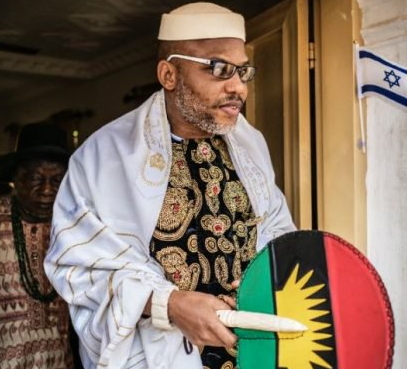 Why The Supremacist Mindset Of The Emergency Rabbi Demands Close Scrutiny

If you haven’t watched the latest Nnamdi Kanu video trending in the social media, you must be one of the lucky few whose firewalls have held firmly against hate-filled garbage daily spewed out of the social media. Even then, for the hordes of Nigerian netizens familiar with his video-casts particularly his unflattering characterization of the country as a zoo and fellow citizens as baboons, it must come as a new one that the infantile, hate-filled rant of the individual who was at best an unknown quantity, or, if you like, a gadfly – until the Buhari administration unintentionally thrust him into the centre of the firestorm of nationalist agitations –recognise no boundaries between the sacred and the profane.

Clearly, if the video is any window into the mind of the individual who obviously thinks the best way to the heart of his people is to denigrate every other group in the Nigerian federation, the greater tragedy must be the delusion it feeds his hordes of followers on his Biafra project.

The undated video is classic IPOB leader –unhinged. It proclaims: “…If you are attending a Yoruba Church, you should be ashamed of yourself, anybody attending a Pentecostal Church with a Yoruba Pastor is an idiot, a complete fool, a slowpoke…They are worse than BOKO HARAM, they are very very FOOLISH, if your Pastor is Yoruba, you are NOT FIT to be a human being…”

To confirm the above, watch the video below

In a country where ethnocentrism is the way we live and have our being, the putative leader of the secessionist agitation would ordinarily seem to have said nothing new that has not been said by different groups making up the federation. Let no one remind yours truly about the infamous allegory about the ‘dogs and baboons’ being soaked in blood’ credited to then then General Muhammadu Buhari, the presidential candidate of the Congress for Progressive Change, CPC, in the aftermath of the massively rigged 2011 elections; or even the royal threat to herd the Igbos into the Lagoon in the heat of electioneering – both of which I insist are as dissimilar as far as context would go – there is something particularly noxious about this supremacist mind-set of the emergency rabbi that demands close scrutiny.

Fine, it is just as well that the IPOB Supremo is riding the crest of popularity at the moment. After all, he literally shut down the economy of the South-east on May 30. If there is any doubt about his extensive his hold on his followers, just imagine how his little-known Isiama Afara community in Umuahia, Abia State has transformed to a Mecca of sorts since he was admitted to bail. Add to that the fawning adulation by his hordes of courtiers, the high profile visitations and the orchestrated photo-ops with the high and the mighty in the South-east, the man is unmistakably having ball. Earlier on, I have talked about his empty bombast; the treasonable activities and not least, his ethnic baiting. Welcome to the new Igbo exceptionalism – all of these thanks to the budding Eze Gburugburu!

Beyond the raw anger, in vain have yours truly sought for any coherence in thought about his idea or his vision for his dream republic. So badly does he want his Biafra Republic that dissent or civility is deemed treasonable. It is either his Biafra or death (?).

The other day, I watched one of his celebrated videos on You Tube. A group of Igbos in United States had gathered to interrogate him on the feasibility of his pet project amidst his grandiose claims about his stock of weaponry and other logistics only to be subjected to a brutal putdown all because they dared to ask hard, probing questions on a project which requires all to come on board! If I came away with the impression that the man either suffers from what psychologists call delusion of grandeur or is an outright fraud, his worst form of uncivility would be reserved for groups outside his Igbo kith and kin – groups that his Biafra had built strong relationships many of which predated the colonial contact, right up to the contraption now deemed loathsome. As far as Kanu and company were concerned, they were at best expendables or worse, mere fodders in his dream project of Biafra. Ever heard of exceptionable xenophobia? It’s a brand new world of delinquency!

Where do we go from here? If I may again borrow the Biblical expression – our fathers may have eaten the sour grapes; it is we, the children’s teeth that are set on the edge. Today, the wages of poor leadership are in full bloom, the country seems set to reap the wages of abdication in full. From the Biafrexit sing-song of the South-easterners, a new chant from the North proclaiming Biafra-must-go has since taken over. Not to be outdone in the secessionist quest, a brand new group in the South-west has since proclaimed its own Oduduwa Republic. Next is perhaps the Niger Delta republic. There is no telling where the next secessionist group will come from. From resource control, to restructuring and now to free-for-all secession; the Nigerian disease would appear to have fully metastasised. Where will the Mutually Assured Destruction (MAD) quest end?

I ask: how will the labelling of groups advance the Biafra quest?

The scripture is no doubt right: Woe to you, O land, when your king is a child, and your princes feast in the morning? It is sadly the case that our elders are left to mumble in their bedchambers while infants – proclaiming themselves as leaders – strut the land. Why should a Nnamdi Kanu not take the centre-stage in the absence of the restraining voices of the elders of the region? I am not talking of elders like Ango Abdullahi, who would instinctively jump behind some misguided northern youths seeking to expel other Nigerians from their abodes; or others like Ben Nwabueze who would struggle, valiantly, to find accommodation for the objectionable methods of Kanu and co.

I have nothing against the Biafran agitation. Like I said, I am all for it provided it is about redressing all the imbalances and the in-built injustices that have hobbled all attempts to create a just and equitable federation. Call it restructuring or fiscal federalism or whatever; so long as it is about good governance, optimal delivery of services and more transparent utilisation of national resources, the nomenclature would matter only a little. What I find detestable is the clanging babel of secessionist voices claiming to speak for the rest of us; their crude and opportunistic appropriation of the peoples’ desire for justice and equity for narcissistic ends.