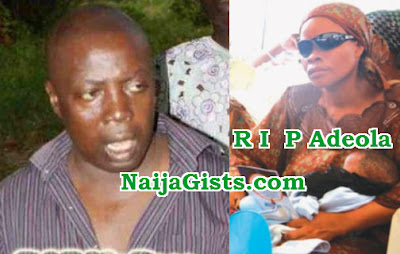 A close friend of the late actor told reporters that Deola was Alasari’s secret wife until his death.

Hear what late Alasari’s friend who requested for privacy said about the ghastly accident that killed Adeola last week:

‘It is a sad news. She died on Friday at Adatan after a truck hit her. She was actually coming from a bank when the accident occurred.’
‘She is Alasari’s secret wife. People got to know her after the death of Alasari. She has a son for him. She will be buried on Saturday in Alasari’s house at Elega, in Abeokuta,’.

Late Ishola Durojaiye passed away on the 20th of March 2010 at FMC Abeokuta where he was receiving treatment after a fatal accident that happened on Lagos-Abeokuta expressway.