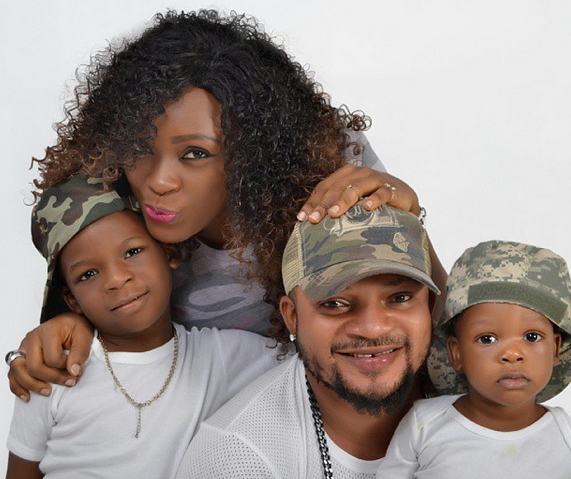 August 23, 2015 – Nigerian Actor Walter Anga & Wife Talk About Marriage & How They Met Each Other

Nollywood actor Walter Anga and his wife Esther married each other about 6 years ago.

See excerpts from an exclusive interview the couple had with Saturday Beats:

How did you meet?

Esther: We met in 2008 at a memorial service that held in Bayelsa State.

Walter: She attended the funeral of my late aunt in Bayelsa State. I always make reference to when we met because she made a good impression. She was a sight for sore eyes, given that the entire family was grieving. 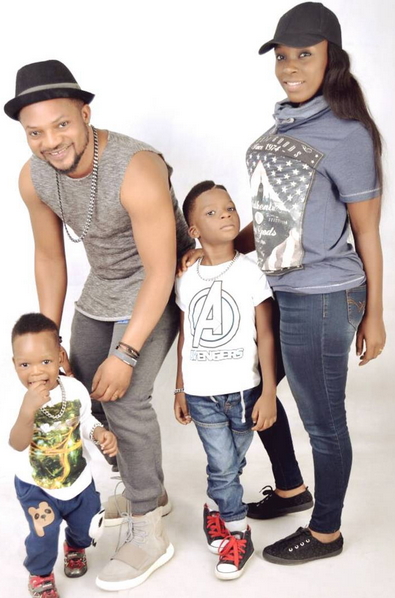 Esther: Yes, it was. He was nice and calm when we began talking and I liked the fact that he was polite when he approached me. He was a real gentleman.

Walter: When we got talking, everything happened spontaneously. It appeared as if we had been friends for several years. Talking to her was quite refreshing and she appeared comfortable with me.

What attracted you to each other?

Esther: His practical and realistic personality was a big attraction. This is in addition to the fact that he seemed quite different from other men I had met. He is a sweet person and fun to be with.

Walter: My wife is very cute and has an irresistible aura. She wears her good nature on her sleeves and quite gracefully too.

How did he propose?

Esther: We went to visit his parents at their family house. While I was talking to his mum and dad, he went on his knees, presented me with a ring, and asked me to marry him. It was a simple proposal and it was easy for me to make up my mind to marry him because I was already in love with him.

Did you think you would get married to an actor?

Esther: No, I did not but does it really matter? The most important thing is that he is good for me.

Esther: We have been married for six years.

Walter: Our marriage is blessed with two wonderful boys, Tyrese and Troy. Our first son is five years old while the second will be two soon.

Do you plan to have more kids?

Walter: That is a possibility and cannot be ruled out. We love our boys and we cherish the idea of having more children but not just for the sake of having kids. We must be able to take care of them and make available all that is necessary.

How do you handle disagreements?

Esther: We talk about it. That way, I make my point known and he does the same. Afterwards, we find a way to resolve it. We do not apportion blame or liability. We don’t try to find out who was right or wrong; we just accept our faults and reconcile our differences.

Walter: Because we understand each other, we like to cool off after we must have had a disagreement. Then, we discuss it at a convenient time and in a relaxed manner. That way, we are able to detect the true nature of the problem and together, we come up with a solution. It isn’t always that straightforward, but thankfully we strive to fix our problems.

Do you feel threatened by his female fans?

Esther: Not at all. I have grown to know him very well and I love him very much. I am his wife and as a wife, I need to support and encourage him. The female fans come with the job and I appreciate them.

Does your wife get jealous when you are with female fans?

Walter: I would be inclined to say no to that. She clearly understands the nature of my work and she respects the fact that female fans and fans in general come with the territory. On my part, I respect the fact I have a lovely wife who appreciates my work and does an excellent job distinguishing the actor from the husband and companion.

Do female fans still chase after you and how do you handle considering that you are married?

Walter: Of course female fans are ever present, whether on set or in public. In some cases they approach me mostly with kind words of appreciation and encouragement. But in all, there is a line not to be crossed, and I strive to make that well understood

Esther: I like the fact that he is hardworking and focused. He believes in his dreams and pursues them with the right attitude. Most importantly, he always puts his family first in all he does. But sometimes he could be tough and difficult to handle in spite of his soft and sensitive side.

Walter: It is difficult to say. My wife is a complete package and with her, it is very difficult to separate vice from virtue. I would say her simple and unassuming nature is a plus. But then, sometimes she is too calm for comfort.

How often do you spend time together?

Esther: We try to spend time with each other whenever he is at home. The kids love to be around their father and they miss him whenever he is away. I miss him a lot too. We make an effort to hang out when we can and sometimes we take the kids out so, we all have a good time as a family.

Walter: We have wonderful kids who keep us elated. They are the center of our universe. You know they say kids change everything but these kids haven’t just changed everything, they are everything. They keep my wife and me on the edge. When the kids are not watching, we love to spend some exclusive and intimate time together either at home or just by hanging out. We cherish such times because they don’t come too often.

Do you spend time together as a family?

Walter: We like to visit our families. The kids love the company of their cousins and grandparents. They never pass on a good opportunity to spin chaos with their mates.

What pet names do you call each other?

Esther: I call him Beau-Beau and he calls me Muu.