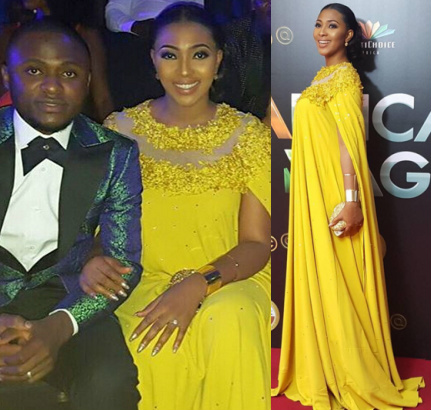 Newly married African women often find themselves being watched for pregnancy signs at the earliest opportunity. Married women from all walks of life get veiled and not so veiled questions about pregnancy, and related issues. Actress, event planner, and beauty parlour owner; Lillian Esoro has probably had her fill of such questions ever since her 2015 wedding to Ubi Franklin hence her almost caustic Instagram post to all busy bodies whom she referred to as “Womb watchers “during the weekend. In her post she put up a witty picture directed primarily at busybodies.

Apparently disgruntled at such bare faced nosiness, the expectant mother made it clear that such enquiries are unwelcome, if not awkward. As she put it, “These people that congratulate you on Instagram, ovary watchers that ask for due date or the sex of your baby when you aren’t even pregnant or you didn’t announce a pregnancy. It’s really awkward so please just stop.”

Pointing out how insensitive it is for someone to ask personal questions, especially if the person is dealing with issues she might not necessarily want to make public, the actress posits, “Do you know if a woman is trying to get pregnant with no success, do you know if she’s going through a loss, do you know if she’s having a difficult pregnancy or if she just wants to keep it away from social media?”

Apparently livid at being questioned about pregnancy, even though she has not made any announcement to that effect, the pretty actress asked all womb watchers to stop asking such questions, as she put it, “So to all the womb watchers that constantly question women about their ovaries on social media… so please just stop.”