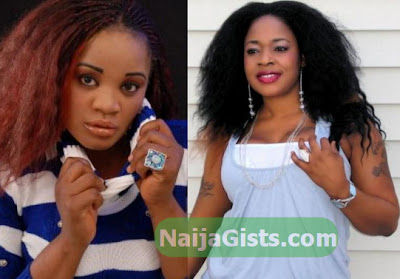 To cut he long story short, in a bid to gain popularity the wrong way, Afrocandy sent an invitation to Nollywood actress Uche Ogbodo via her Facebook wall but Uche has since turned down her request.

In this recent interview with Punch‘s Nonye Ben-Nwankwo, Uche Ogbodo talked at length on what happened between them.

She didn’t approach me personally to say I should star in her movie. But she released a statement on her Facebook wall. I saw the statement because a lot of people drew my attention to it. I didn’t know who she was, but I had heard of her because the media had been saying unpleasant stuff about her.

She replied your statement…

Oh yes. She replied and blasted me. But I didn’t react. I wouldn’t want to cheapen myself. I would have been promoting her if I had done that.

But we learnt you sent friendship request to her on Facebook?

I don’t know her. I don’t think she is my friend on Facebook. It is funny. She was just trying to make herself important. I know who I am. I have well over 24,000 followers on Facebook. I don’t think I sent a request to her. I can only do that to people who are bigger than me, especially big companies. I don’t use Facebook to connect to anybody or set up a friendship. I have so many messages on my wall but I cannot reply. They are so many. This was somebody who said she wanted to act alongside me and some others in her movie. It then meant she had some high regard for me. I didn’t go to meet her and beg to be in her movie. She is not the kind of person I would want to relate with. I want to be friends with women of substance. I want to be known for good reasons and not bad. I want to be friends with people who live a good life.

Would featuring in her film have been a bad idea?

Going back to Afrocandy, why do you think she added you to the list where she had Anita Joseph and Cossy Orjiakor?

I wouldn’t know. Maybe she sees strength in the three of us. It maybe she also saw confidence and an ‘I can do all things,’ spirit in all. Otherwise, I wouldn’t know why she would put me in their category. I don’t have butts like Anita. My boobs are not as big as Cossy’s. I wear a size 34D. I just have broad shoulders.

Afrocandy’s real name is Judith Opara Mazagwu, she is an Igbo woman who is currently based in the United States Of America. She is a mother of two.

Afrocandy and her husband back in the days.

She was married to a man US-based Nigerian man who sponsored her to America. On getting to the US, she dumped him.