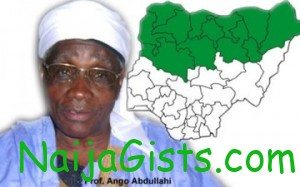 Have you heard about 2015’s Break-up prediction on Nigeria? You need to read it. naijagists.com

After the growing calls for the convoking a Sovereign National Conference to decide the future of Nigeria, a prominent Northern elder and chieftain of the Arewa Elders Forum (AEF), Prof. Ango Abdullahi has said that the region would survive if the country splits even today.

Abdullahi, a former adviser to ex-president Olusegun Obasanjo on Food Security, while speaking on the Hausa service of the British Broadcasting Corporation(BBC) monitored in Kaduna hinged the survival of the region on agriculture.

He said the North had no problem with transforming the fertile land at its disposals, saying that over the years, the region had built most of its factories, textile mills with agricultural proceeds.

He argued that once Northerners go back to the farm like their fore-fathers, they could survive any situation including a divided country even as he lamented the state of insecurity in the country, and reiterated AEF resolve to work towards the continued existence of the nation.

“The land is still there and the water. Our forefathers built all the factories, the textiles, the oil mills in Kano, all were built from agricultural proceeds. Therefore if we returned to what we have, God has given us fertile land, we won’t lack what to do and we will surely stand on our own no matter the situation this country finds itself,” he said.

“We know this is an old call, it’s been long for over 20 years, and they have been saying this corporate existence of the country, that the Federal system is faulty. They are keen in sitting down to discuss what kind of arrangement would be conducive for Nigerians. This is an old call and it is not a new thing, some people are hiding under the guise of this agitation to show that they are tired of staying in a united Nigeria.

“Therefore, we have resolved that we are not going to be the cause of Nigeria breaking up but if others decided that the country should be divided, and they insisted that Nigeria should break up, we won’t say no because we realized there is nothing we are getting in the current arrangement that other sections of the country are not getting .If they insisted, why don’t we sit down and talk? If at the end everybody agree that Nigeria should be divided, if at the long run, everybody is satisfied that the country should break up, let it be.

“He (the poor) feeds himself from what he cultivates in the farms and feeds Nigeria up till tomorrow. It is possible if all Northerners would return to what their forefathers did through agriculture with which proceeds they built the North and Nigeria as a whole.” By Innocent Senyo

Do you think the North will survive if Nigeria happens to break up today?