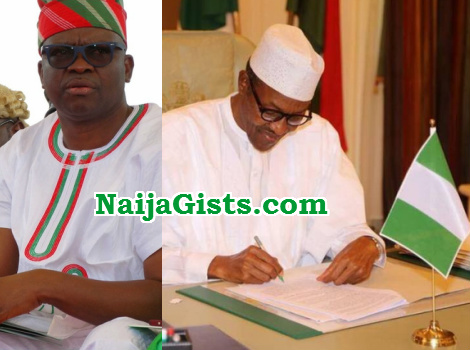 The Northern Youths Intellectual- Advocacy Forum (NYIF) through its President urge Governor Fayose to be patient with PMB, other than constituting himself to an angry dog against the policies of government as well inciting the members of the public against the good intention of the ruling party APC.

We are concerned that a Governor whose point of call is to fulfil his electoral mandate to the people of Ekiti State is always in the news for wrong reasons, as the act of governance goes beyond stomach infrastructure popularly purported by his style of leadership.

There is no gain saying that Governor Fayose has lost every right sense of decency to modern day reality, we know for a fact that he is Ndi Amin of Ekiti politics no doubt about that, the tallest Iroko tree of character assassination, the symbol of PDP and moral decay for African children, the desperate sinking man who is gasping and thrashing in self-inflicted illusion of Jonathan’s defeat, the greatest mistake of political leadership of our time and strong personality for induction into the Golden Jubilee Award of Hall of Shame.

In Fayose we see a frustrating man who is not only languishing in pains of having to swallow his own vomit seeing PMB becoming the President of Nigeria despite his doom prediction, but a man who is constantly becoming a National embarrassment to the people of Ekiti State and beyond. Whereas, if Fayose is a true reflection of intellectual depth of the people of Ekiti State which branded itself as fountain of knowledge, then every meaningful Nigerian would choose to be an illiterate in a true sense of it given the humongus show of lawlessness exhibited by the Governor of the State in recent days.

We urge the people of Ekiti State as a matter of National importance to subject their Governor to psychiatric evaluation in order for us to ascertain his health status, because it is obvious Fayose who has lost every honour is down with Buharian Amnesia Syndrome (BAS), a chronic brain disorder where individuals with moral deficiency are constantly tormented at the mention of President Muhammadu Buhari’s name, or probably he Fayose is still leaving in the past where impunity and unending display of gangterism orchestrated by “myoga@dtop” held sway, forgetting that this is the era of Change piloting by his amiable, discipline and incorruptible President Muhammadu Buhari (PMB).

What a Governor has fayose become in his second coming? His outburst and series of attacks on personalities irrespective of their age and background call for concern in a decent country where youths look up to their leaders as role model. He has branded himself as epitome of arrogance, while those sympathetic to the course of PDP woes are gradually buying into his bullying philosophy, a deviation from the legacies of our founding fathers of one indivisible Nigeria. To many he is unfortunate Governor of Ekiti State, a looser and a first class joker who lacks every bit of moral value for emulation, except you want to end up in prison for embracing anarchy, because the danger of choosing him as your role model is that godfatherism would no longer be profitable in politics.

Yes! Governor Fayose is the Executive lordship of Ekiti State, a choice his subjects would have to tolerate for the next 3years and some months, yet this is not enough for him to force his thinking on gullible Nigerians. For Fayose to be taken seriously, these are sensitive boiling issues he need to answer.

To answer the above questions, it is of paramount importance we are quickly reminded that despite the chronic hardship Nigerians were subjected to in the last 6 years, no group from Northern Nigeria ever raised a placard to protest against the government policies, rather endorsement of some sort for monetary gains by some groups. Whilst, the Petroleum Subsidy Protest started in Lagos and the least some of us could do was to offer a constructive criticism, even when Dame Patience Jonathan was becoming a lord unto herself and nuisance to our polity, Nigerians still maintain their decorum and placed their hope in God to fight for then and just because Nigerians rejected the looting PDP for incompetency caution must be throne to the wind with all manners of activism in Nigeria.

On what moral guts does Fayose now stand for crying woe of bitterness to high heaven, on account of intimidation and harassment of opposition party PDP by the DSS under Daura?as we all know the DG DSS is a nice man with discipline and professionalism.

We still ask is Fayose the only Governor in Nigeria? On what bases is he dwelling to question the legality of appointments made by the President so far? More so that he need to ask PMB for forgiveness for all the insults he rained on him during electioneering.

In the thinking of Fayose with his Gejmatic equation, 7 is always greater than 19, in his thinking Goodluck Jonathan was stupid for relinquishing power to his Excellency PMB even when it was obvious he lost the election, in his thinking Godswill Orubebe act of treason for truncating peaceful conducted election at the collation centre should be regarded as heroic, in his thinking her Excellency Marilyn Ogar the Chief tormentor opposition party, would ever remain the best Madam for the job because APC secretariat must be ransacked and its staff molested for attempting to dare contest against PDP,
in his thinking Goodluck Jonathan used of the controversial Commissioner of police, Joseph MBU against the then Hon. Rotimi Amaechi of RIVER STATE and its Assembly was the right step in the right direction, in his thinking locking up the EKITI State House of Assembly while deploying thugs and armed men against the 19 APC law makers was a dream come true, in his thinking a perceived judge not on his side must be beaten to coma as heaven would not fall, in his thinking mimicking his ageing mother to score cheap political gains is normal, in his thinking taken over the work of Federal Road Safety Corps as inspectorate Officer should be the modern standard for all the governors in Nigeria.

In a sane environment where justice, equity and fairness prevails the likes of Fayose can never be governor against a well-polished, calm demeanour of his excellency Kayode Fayemi, at best Motor park tout would have been suitable for him in order to exhibit his ‘agberoship’ to the admiration of his merited profession. Of course, under the guise of stomach infrastructure the people of Ekiti were swindled and robbed of their dignity with the help of security apparatus.

Ekitigate is still fresh in the mind of Nigerians as the best the Governor Fayose could have done is to go with a measure of quietude and concentrate his energy on providing quality governance if he did have any to the people of the State, other than constituting himself to a rotten apple to national discuss.

What more? PMB is a father of all and this explains why a Chief of Defence Staff Major Gen. Abayomi Olonishakin could be picked from the Ekiti State without recourse to mudslinging, death advertorial and constant blackmails of his Excellency as it were. Nigerians would ever remain grateful to God for the life of our President at this point of our history, a country of near-collapse on account of PDP 16 years of human and natural wastages, unending corruption, cluelessness, impunity, over zealousness, hunger and poverty, life of hopelessness, perpetual darkness, lingering strike in our tertiary institutions, High mortality rate, and insecurity.

To this end, we still hope and pray Governor Fayose repent of his ways and embrace peace for National growth and development. Who knows he might turn out be a good ambassador, a prayer many would argue with us may fall into the deaf ears of Angel.