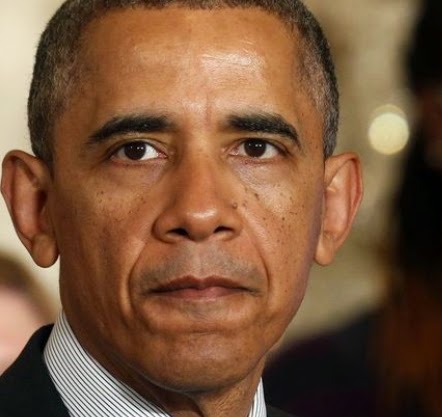 May 7, 2014 – Obama Declares War On Boko Haram As US Sends Military Experts To Nigeria To Rescue Kidnapped Chibok School Girls

The President of the United States of America, Barack Obama yesterday condemned dreaded Boko Haram Islamists for kidnapping over 200 girls at a public school in Chibok, Borno State.

He described the kidnapping as “heartbreaking” and “outrageous” as Washington deployed military experts in the hunt for the children.

He urged global action against Boko Haram and confirmed Nigerian leaders had accepted an offer to deploy US personnel there, soon after residents said the extremist group had seized eight more girls, aged between 12 and 15, again in the embattled northeast.

The first group of girls were taken three weeks ago, and concerns have been mounting about their fate after Boko Haram chief Abubakar Shekau claimed responsibility, saying his group was holding the schoolgirls as “slaves” and threatening to “sell them in the market”.

“This may be the event that helps to mobilize the entire international community to finally do something against this horrendous organization that’s perpetrated such a terrible crime,” he added.

The team sent to Nigeria consists of “military, law enforcement, and other agencies”, Obama said, and will work to “identify where in fact these girls might be and provide them help”.

He denounced Boko Haram as “one of the worst regional or local terrorist organizations”.

US officials have voiced fears that the more than 220 girls, aged between 16 and 18, have already been smuggled into neighbouring countries, such as Chad and Cameroon. The governments of both denied the girls were in their countries.

Their fate has sparked global outrage and may constitute a crime against humanity according to the UN.

Shekau said his extreme Islamist group was holding the schoolgirls abducted on April 14 in the northeastern town of Chibok as “slaves” and threatened to “sell them in the market”, in a video obtained by AFP on Monday.

Parents of those taken said Shekau’s video had made an already horrifying situation even worse.

“All along, we have been imagining what could happen to our daughters in the hands of these heinous people,” one mother, Lawal Zanna, told AFP by phone from Chibok.

The latest kidnappings also took place in Borno state, a stronghold of the Islamist group.

Abdullahi Sani, a resident of Warabe, said gunmen had moved “door to door, looking for girls” late on Sunday.

“They forcefully took away eight girls between the ages of 12 and 15,” he said, in an account confirmed by other witnesses.

He said the attackers did not kill anyone, which was “surprising”, and suggested that abducting girls was the motive for the attack.

Another Warabe resident, Peter Gombo, told AFP that the military and police had not yet deployed to the area.

“We have no security here. If the gunmen decide to pick our own girls, nobody can stop them.”

Though initially slow to emerge, global outrage has flared over the mass abduction in Chibok, where Boko Haram stormed their school and loaded the girls at gunpoint onto trucks.

Several managed to escape but over 220 girls are still being held, according to police.

Since the attack, parents have criticised the military’s rescue mission, saying there had been a lack of urgency from the outset.

Enoch Mark, an outspoken critic of the authorities since his daughter was kidnapped in Chibok, said “the government should find our girls or seek international assistance if it cannot”.

“Boko Haram are not spirits or extra-terrestrial creatures that cannot be tracked and subdued,” he told AFP by phone. “The agony and trauma are becoming too much for us parents to bear.”