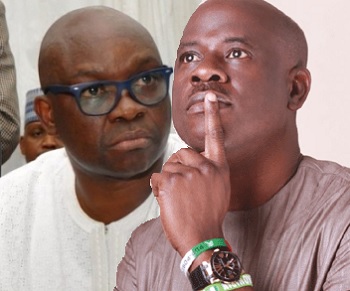 When former Minister of Defence returned to Nigeria from the United States yesterday, Nigerians were surprised as he has promised never to surrender to the EFCC.

He immediately dropped his luggage in Lagos before heading to the EFCC office in Abuja for questioning.

The anti-corruption agency who detained Obanikoro since yesterday is still investigating his involvement in the N4.75 Billion Dasuki Gate fraud.

According to a source who requested anonymity, Obanikoro opened up to the EFCC this afternoon that he gave Fayose several millions of dollars from the $2.1billion money earmarked to secure equipment for the Nigerian military under Good luck Jonathan’s administration.

He however said he was not the owner of the company as alleged by the EFCC.

His confession continues below:

A source at the agency office said Obanikoro claimed that part of the money was used to fight Boko Haram aggression in Lagos and the South West.

The source added that the ex-Minister was lured to Nigeria on the promise that if he can be truthful, he may go free like Fayose and other corrupt politicians who looted Nigeria dry under ex-President Goodluck Jonathan’s administration.