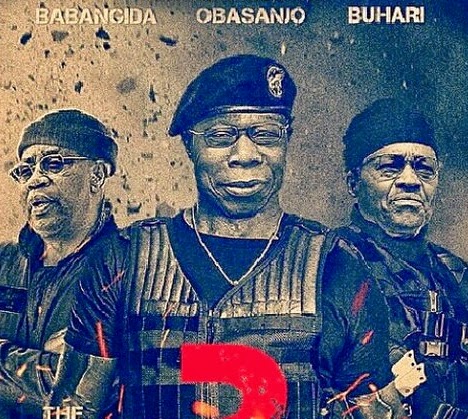 If you’ve not watched this movie, you have watched nothing yet. The movie we have being waiting for just arrived cinemas across Nigerian. Its one fantastic movie you will pray never to miss, I can tell you with certainty. It is “Obasanjo the Movie”

It stars famous acts such as Olusegun Obasanjo popularly called OBJ the “godfather”, Goodluck Jonathan popular called GEJ is “actor”. Mohammadu Buhari popularly called GMB, Ibrahim Babangida popularly called IBB, the late Musa Yaradua and a host of other naijapolihood stars also find their acts in this movie. I can assure you, by the time you are through with this movie; you would have cracked your ribs a thousand times.

In this hilarious yet touching movie, Obasanjo is the powerful president who uses his nefarious power to force his desirable but ill candidate Yaradua and his goodluck candidate Jonathan on Nigerians. He strolls around Nigeria telling Nigerians he has the right choice in the Continuity of his Party the PDP. Nigerians as always supports him and INEC enforces the result.

Buhari is presidential candidate of another party CPP who struggles for the umpteenth time to have a second chance at the presidency. But baba Obasanjo shoves him off and reminds him that he “Obasanjo will be the last former military personnel to be president of Nigeria.” Buhari hits his head a thousand times and visits Mecca for prayers.

Notable Nigerians complain of Yaradua’s ill health but Yaradua who is also power hungry rebuffs such claims. Obasanjo appears on the media to tell Nigerians, Yaradua is hale and hearty. Elections are run and Yaradua becomes president. Obasanjo smiles as he takes over a new position as Godfather, chairman board of trustees of his political party.

Yaradua appears calm but begins to act fast supported by his humble but sly Jonathan. From one good policy to another and then, good things never last, he disappears to God knows where. After months of searching for Mr President, it appeared no one knew where even Mr. vice president as cabals try to protect their interest and keep the haling president Yaradua secret.

Good luck finds Jonathan whose second name is Goodluck and Obasanjo picks him up as his joker, celebrates him and joins him in the Nigerian tour for a good luck acting president. Jonathan seemed to be carried in the moments and promises to work hard for the “nation”. Obasanjo never noticed his sheep was indeed a strong wolf and stands by him through all the opposition against his candidacy.

Finally, Yaradua gives up and Jonathan substantiates his new found national control, Obasanjo muses at his new control opportunity as the godfather. Jonathan consolidates on his power gets a first term as president supported by Obasanjo and after that trouble started.

Buhari wouldn’t give up even against Obasanjo’s prophesies and he challenges Jonathan who has the backing of almighty baba Obasanjo. Jonathan wins in a landslide and Buhari hits his head again in another failed attempt as he cries fowl.

Ill tempered Buhari promises lightning and thunder from heaven that will disrupt Jonathan’s government and it happened that Boko Haram a group overlooked by Obasanjo became even deadlier, a group Jonathan manages to tackle without much success

Obasanjo anticipates favorable outcome as the back sit captain who would drive the ship behind Jonathan. Jonathan though bends on ensuring he offers Nigeria his bargain, the transformation agenda of his former boss. He introduces subsidy removal, a small oil industry leakage initiated by Obasanjo where cabals are said to make so much money from. Subsidy removal causes trouble and cabals spear headed by Obasanjo begin to whimper at Jonathan. The battle against Jonathan begins and Jonathan replies swiftly using his presidential powers.

Jonathan struggles to get over every attack but Obasanjo is resilient and defiant. Soon enough though, Jonathan manages to change the constitution of his party the ruling party PDP and Obasanjo is removed as chairman board of trustees pushing Obasanjo to irrelevance. Obasanjo becomes furious but calm, a wounded lion. The president is president so he has to play his game cautiously. Obasanjo begins to write

Open letters discriminating Mr. Jonathan and Mr. Jonathan too is calm but offers his replies too. Online media blossoms on this banter and a huge followership and comments follow the news.
Four years seem to run very fast and time arrives for another elections. Jonathan’s words “all I need is one term” arrives from the blues. Obasanjo is determined not to have Jonathan return so he begins a strong media campaign against him publishing series of letters and a biography of himself with a chain of words describing Jonathan in bad light. His book though gets banned in Nigeria but he happened to have released it online so it travelled faster than anticipated. Jonathan though has tasted power and he would give up anything for another four years on Africa’s hottest seat.

Buhari’ party CPC forms a new coalition with Tinubu’s ACN and Aliero’s ANPP to form the brand new APC, the change propellers. Jonathan and his PDP trembles and begin a plot to outdo the new coalition. Obasanjo had initially waved off Tinubu’s ACN as no serious threat. He called them “Chameleons” always changing names. Tinubu’s though seemed to have found the right name in APC.

Trouble emerges in the PDP and Amaechi changes camp to APC. A new wave of shifts results as serious members, Senators in the national assembly as well as representatives switch camp from the PDP to APC.
APC become stronger and after a grueling party convention, Buhari again emerges again. Jonathan returns unchallenged and Obasanjo fumes. Something must be done to challenge Jonathan so Obasanjo decides he’d change camp but he fears being laughed at so he secretly supports APC but publicly declares for PDP. Obasanjo is still powerful though so Mr. Jonathan battles to find his favor, one Obasanjo would not offer.

The game changes with the new APC men wielding brooms who show determination to sweep Nigeria of PDP. Buhari begins serious campaigns and Jonathan follows suit. Online campaigns become vehement and for the first time Jonathan seemed to be on the receiving end. He guns for support from men of the cabal, men he had almost removed food from their tables.

Ibrahim also known as IBB welcomes a surprise visit of his president at his mansion. He begs Obasanjo and IBB but the duo seems vehement to have Jonathan out. IBB though shows soft spot for Jonathan with these glaring words “Jonathan has the good of Nigeria at heart.”

Jonathan seems never to be deterred as he jumps from one state to another for his campaigns. Buhari is also carried away by the new wave of acceptance across Niger area. Obasanjo shakes his head to the success of his media campaigns and the APC. He soon becomes non partisan first by declaring that “Nigerians should vote for candidate not party” but says he is still “a card carrying member of the PDP.”

Obasanjo goes gaga spewing words against Jonathan and his PDP members in faraway Kenya where he launches his banned autobiography book. George Bush Junior replies him in faraway America “it is sad that a former president quest for publicity should take him to the length of rubbishing the image of his successor.”

Obasanjo openly supports Buhari, the man he once condemned to the world of failed “would have been” presidents of Nigeria and Tinubu’s APC once condemned as chameleon in attribute, he now openly supports.
Jonathan and the PDP can’t bear Obasanjo no more. His anti party antics doesn’t help PDP campaign strategies. Obasanjo is sacked off PDP and he tears his PDP card before a huge crowd of supporters.

Go watch at naijapolihood cinemas across Nigeria and online.