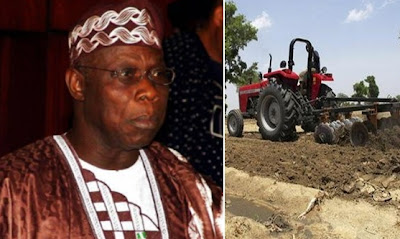 Former President of Nigeria, Olusegun Obasanjo has expanded his farming business into the country of Liberia.

Dr Florence Chenoweth, Liberia’s Minister of Agriculture, who performed the dedication ceremony said that the farm would create about 30,000 job opportunities for the citizens.

She noted that the Liberian government has focused on the agriculture sector in its efforts to create jobs for the people.

She, however, urged legislators, chiefs and superintendents from Cape Mount County to advise youths in the area to seize the opportunities presented by the new farm to become productive, while ensuring the area’s development.

Chenoweth stressed that the establishment of Obasanjo Farms would help in addressing one the salient aspects of the government’s efforts to ensure food security.

She noted that more than 40 per cent of Liberian children had stunted growth, stressing the need to solve the problem by fast-tracking the production of eggs and poultry in Liberia.

“We need to produce proteins either in beans or meat, which the cattle, goat and piggery produce, in Liberia, so as to ensure balance diets for our people’s nutrition,” she said.

Earlier, President Ellen Johnson Sirleaf described President Olusegun Obasanjo as a visionary leader who was responsive to the needs of the people in critical areas.

She commended Obasanjo for his constant support for Liberia and for having faith in the future of the country.

Also speaking, Mr Daniel Atsu, the Group Managing Director of Obasanjo Holdings Limited, said that the farm was set up in anticipation of the adverse effects of global warming and climate change on poultry production in tropical Africa.

He stressed that such anticipation informed the decision of Obasanjo to develop African poultry breeds which could thrive in hot and humid environment.

Atsu said that the farm had six standard poultry houses, adding that two of them were for breeding young chicks, while the remaining four were equipped with three-tier automated layer cages.

He said that the first and second batches of about 10,000 layers had started laying eggs.

He said that the layer houses would soon be increased to 16, a capacity which would produce about 15,000 farm fresh eggs daily.

Atsu said that the farm would offer unlimited opportunities to farmers to grow corn, soybeans or supply dried or smoked fish in large quantities, saying that the farm was situated on 125 acres of land.