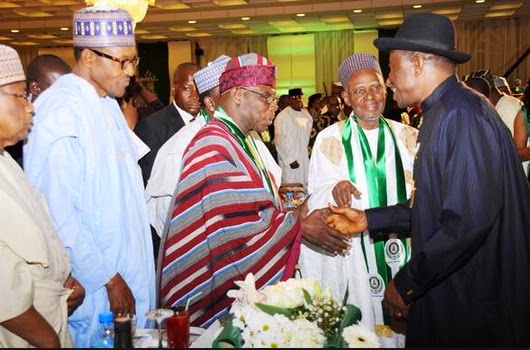 Feb 15, 2015 – Obasanjo: Jonathan Afraid Buhari Might Jail Him Over Corruption, Election Will Be Inconclusive

Obasanjo who just returned from London said President Jonathan forced INEC to cancel the Feb 14 election for the odds to land in his favour.

“I believe the President’s fear is particularly motivated by whom he sees as his likely successor, that is, Gen. Muhammadu Buhari. I believe people would have been telling him that Buhari is a hard man; he will fight corruption and he (Jonathan) may end up in jail if not in the grave. I think people would have told him that sort of thing and he is not the only one afraid of Buhari.”

“If Buhari has not learnt his lessons, he would be probably the most unlearning human being. Now if he has learnt his lessons, he will know that you do not fight corruption by putting people in jail for 200 years. This was done by my predecessor in office, Gen. Abdulsalami Abubakar. He recovered over $750m from Abacha’s estate without putting anybody in jail and without harming or hurting anybody.

“When I took over, we recovered over $1.25bn from the same Abacha without hurting anybody and without harming anybody. What is rather unfortunate is the fact that our lawyer who is still alive, who was chasing this money all over the world, said to us that there was still well over $1bn to be recovered from the Abacha estate.”

“President Jonathan has a grand plan to ensure that he wins the election by hook or crook and if he loses, he scuttles it and brings chaos and confusion in the whole country.

“It looks to me that the President is trying to play (Laurent) Gbagbo. Gbagbo was the former President of Cote d’Ivoire and Gbagbo made sure he postponed the election in his country until he was sure he would win and then allowed the election to take place. He got an inconclusive election in the first ballot and I believe this is the sort of thing Nigeria may fall into if I am right in what I observed as the grand plan.

“Then in the run-off, Gbagbo lost with 8 per cent behind (Alassane) Quattara and then refused to hand over. All reasonable persuasion and pleading was rebuffed by him and he unleashed horror in that country until nemesis caught up with him. I believe that we may be seeing the repeat of Gbabgo or what I called Gbagbo saga here in Nigeria, I hope not.”

“I was away because I had a number of assignments abroad which took me to Morocco, Munich, Nairobi, London and New Delhi. Exactly a week today, when we were in Munich for what they called the Munich security conferences annual event, everyone in the security community was there.

“I refused to make any categorical statement on this issue because I wanted to come back home and learn what actually transpired and what was going on, and it turned out to be a forced decision on the INEC, because it was alleged that the security chiefs were unable to provide security and as a result, the Chairman of INEC had to postpone the elections, in accordance with the dictates of the so-called security chiefs.

“It was even made worse when the President in the media chat on the 11th of this month claimed not to have knowledge or not to have authorised it. I get worried, very worried that if the President of Nigeria is not in charge of security, maintenance of law and order and such a decision can be taken behind him, assuming that it is true, then the President must be reigning and not ruling.”

“I have offered some warnings but let me also offer some appeals and the appeals for me will be for President Goodluck Jonathan. I appeal to him not to do anything to destroy the fledgling democracy that we are enjoying, democracy is not a destination. It is a process and the more we strengthened the process of democracy, the institutions and the factors, the better it is for us.”