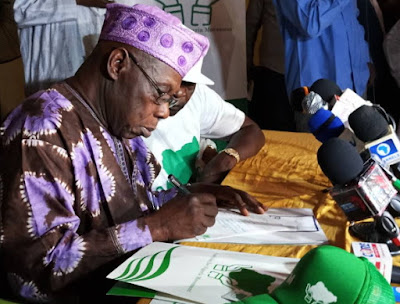 Former President Obasanjo and his cohorts have launched his proposed third force, Coalition for Nigeria Movement. But Nigerians will take only one look at it before tossing it into the garbage dump. This is no third force! This is no real coalition of Nigerians! This is a farce: the third farce.

The purveyors are just rearranging the deck chairs on the titanic: their undertaking is never meant to serve any useful or enduring purpose. It is a sham, a front put up to deceive innocent Nigerians and lead them once again down the already treaded path of confusion, illusion, pain and regret. The coalition is a product of deception and will bring forth nothing good.

The chief proponent has no moral background to ever think he can lead Nigeria in a new direction. He has never ever had that noble intention nor ever tried to do so. He has just embarked on another narcissist-induced sojourn in which the innocent hopes of Nigerians will be brutally traded for political ends, ends completely personal and highly parochial. Propelling him on this journey is a devilish impulse to cut down real and imagined personal political enemies, regardless of how Nigeria fares in the process.

But that does not mean Nigeria does not need a third force. Sure we do. But that force should not be another platform peddled by politicians who grew and benefitted from the old order, and who have since lost the capacity to accommodate new ways of doing things.

The third force should rather be a force of Nigerians from every station and work of life, armed with their PVCs, ready to troop out en masse to vote out a nonperforming government, and enthrone another who to them shall seem most likely to ensure their security and prosperity. It should be a force of diligent and politically conscientized Nigerians who will no longer be taken for granted by their political leaders, and who are capable of recalling errant and ‘unrepresentative’ representatives and frustrating bad leadership at all levels of governance.

That force should be the rising of ordinary men and women of this country with a new belief in ‘people power’ and a conviction that they can demand and get the best from any government, anywhere and anytime.

Surely, Nigeria does not need another platform whose main aim is to juggle for power. No! Not a force of erstwhile raiders and pillagers of the country who are seeking a fresh ground to begin a new game; not a force of disgruntled politicians looking for the cheapest way to achieve political ends; not a force proposed and led by a man who was a bad leader in his time, who was frustrated in his dubious tenure elongation bid, and who seeks at all times to put a leader of his own making on the throne.

This third force is a farce and a charade. The intention behind it is misrepresented. It does not and will never represent the interest of Nigerians. It wants to ride to pre-eminence on the wings of popular sentiment. This coalition is only interested in 2019. It is now masquerading as a genuine non-party platform for national good but will in no time metamorphose into a political party with the members out to grab power for themselves. These people want to take Nigeria on a ride and Obasanjo is on the driver’s seat.