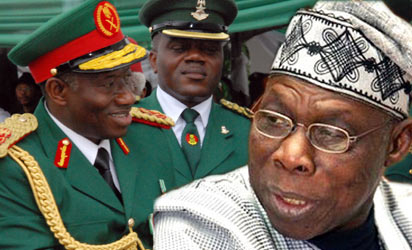 Former president, Chief Olusegun Obasanjo, yesterday, broke his silence on the feud between him and his estranged political son, President Goodluck Jonathan, saying he would not stop commenting on national issues.

He, however, said that despite the public perception on the disagreement between the duo, Jonathan remained his president.

The former president added: “If there is anything that requires my own comment, position or views. I will say it. It is only when you kill me that I will stop doing so. It is my passion, patriotism and love that will continue to make me say my own. If it is the party that I see that something is inimical to the growth, I will talk.”

The feud between Obasanjo and Jonathan blew into the open when Obasanjo said the Federal Government was not doing enough in tackling Boko Haram, saying the government was not decisive on the insurgency. The former president cited what his government did to quell the militancy in the Niger Delta, precisely Odi town in Bayelsa, when some militants killed five soldiers.

Jonathan,a week or so later, replied him during a presidential chat on television, that his government would not take such a decisive action against the Boko Haram because the Odi invasion did not achieve the desired result. According to the president, he was the Bayelsa deputy governor at that time and that, shortly after the place was leveled, all he could see were bodies, women and children.

While describing the PDP national chairman as a respected leader, Obasanjo said, yesterday, that Tukur was a delight to have always.

He said, “It is always a delight to have our ogas (boss) to visit us to see what we are doing or what we are not doing.

“To know our anxiety, aspirations and concerns. And also to disabuse the minds of rumour mongers. The president is my president.

“Without Nigeria, there will be no party. Even when I was in prison, I was not quiet. Those who want me and the chair to quarrel; this visit will keep them quiet. But my mouth will not be quiet.”

Obasanjo, who also used the occasion of the visit by Tukur, to dispel his death rumour, wondered why people would continue to spread such rumour, remarking, “I am still alive anyway.”

In his remarks, Tukur, the PDP National Chairman, explained that he was in Abeokuta to thank the former PDP Board of Trustees Chairman for his consistent role not only for the party.but also the country and the international community. “Your support has never been relenting and I have come to say thank you, sir.”

Tukur however affirmed the leadership of the Dipo Odujirin-led executive in the state, declaring that the party only recognized the elected executives. [source]