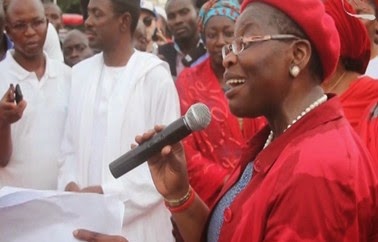 July 21, 2014 – Oby Ezekwesili Travels To London For BBC Interview After SSS Released Her

Former Education Minister, Obiageli Ezekwesili was detained shortly this morning by SSS while she was travelling for an interview on BBC Hardtalk in the UK.

The SSS operatives also withheld her passport but released about 30 minutes after she was detained. “SSS has released it. Just barely made the BA flight. Last to board @ 7.55 for an 8.00 am flight that is now taxiing. Is this a DEMOCRACY?, she wrote on Twitter page.

In earlier tweets, she wrote about her detention. “I am being detained by the SSS @ Nnamdi Azikiwe International Airport . The SSS has REFUSED to GIVE MY PASSPORT TO ME.”

“On my way to London this morning for my @BBCHARDtalk appearance billed for TOMORROW and the SSS has DETAINED me by WITHHOLDING my PASSPORT.”

The #BringBackOurGirls campaigner has been released. She is enroute to London , UK for her scheduled interview.