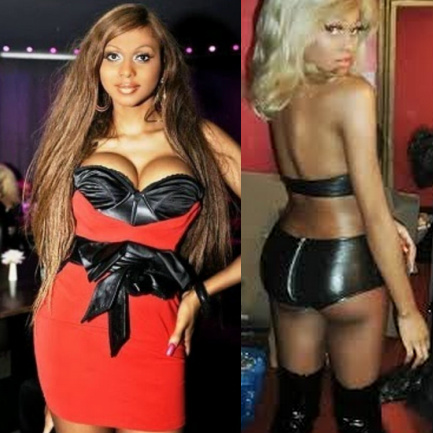 Sept 21, 2015 – Oche Clifford, Miss Sahhara: Nigerian Man Who Turned Woman Says He Has Removed His Penis, Replaced It With Vagina

The dude told his/her Facebook fans few hours ago that he removed his manhood several years ago.

“… I had my gender reassignment surgery years ago, not that it is your business to know what I have between my legs……no one was born a man or a woman. You are born male, female or intersex. You are assigned assumed preferred gender at birth by the hospital. Then you grow up as a boy or a girl based on the gender you are assigned, you become a teenager, and an adult subsequently ‘Man or woman’. I lived part of my teenage life and all my adult life as a female. Saying she/he was born a ‘Man or woman’ is****** i have always been a female. my brain, voice, mannerisms & appearance are all female. i didnt have any sudden epiphany to self discovery after living in one gender all my life as some of these bloggers may think…Perhaps, is the reason why I am effortlessly womanly ………f**ls**

This is in response to comments made by Nigerian bloggers on his bikini shoot.

A note to Oche Clifford:

For the records, Oche Clifford was born a male in Benue State Nigeria.

He dropped out of Benue State University when his secret homosexual activities was exposed and relocated to the UK where he underwent sex change surgery to turn himself into a woman.

Most of his classmates are yet to come to terms with his new lifestyle.

Even his room mates were shocked because he used to be a well endowed man.