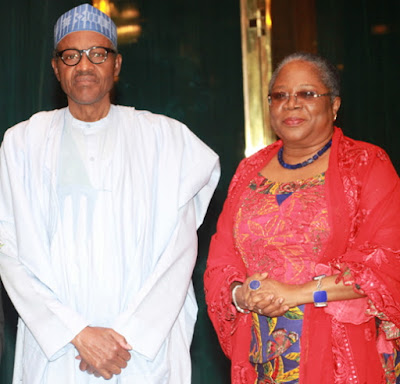 Feb 22, 2016 – Onyeka Onwenu Spits Fire, Says Buhari Fired Her Because She Is Igbo, Narrates How Hausa Politicians Almost Killed Her

“When the call came on Sept 13 2013, to serve the Nigerian people as DG National Center For Women Development, I took it as a call from God and I answered in the affirmative.

I served for 2years and five months and did my best under very difficult conditions. We hardly had money to operate and the place was badly run down. Worst, there was low moral and lack of commitment among the Staff.

Most spent the day loitering and gossiping. Many would not show up for work or arrive 11 am, only to leave before 3 pm. Some were absent for months and we’re just collecting their salary at home.

My administration changed all that. Most Staff were turned around and became passionate about the work, appreciating also the changes they thought were not possible but were happening right before them.

There remained though, a remnant who felt that the Center was their personal preserve and that the position of Director General should only go to someone from their part of the country. I was initially dismissed as just a Musician.

When that did not work, I was targeted and abused for being an Igbo woman who came to give jobs to and elevate my people while sidelining them. When these detractors could not provide answers to the spate of improvement we were bringing, they resorted to sabotage and blackmail. The first such salvo was fired when a Senate Committee visited on an oversight mission a few months after my arrival.

All three Generators at the Center were cannibalized, overnight, just hours to the visit.
We got over that incident and trudged on. The rest of our activities and accomplishments, modest as they is public knowledge. I have never in my life been an unfair person. I never favored any group I carried everybody along. But I did not put up with deliberate incompetence and a refusal to learn, an attitude of entitlement which some people displayed. We brought back a level of professionalism and commitment to deliver on our mandate. Without these attributes, the Center would have fallen apart.

When the call came for me to disengage from the Center, I took it in good faith and with thanksgiving to the Almighty, Yes some stakeholders were upset and tried to make a case for me to continue. Their effort was a testimony of God’s grace on my administration, but I also knew that it was time to go. God who sent me there was taking me to a higher level of service. His infinite wisdom is unassailable. That is my faith. Besides, I was exhausted and had abandoned many personal projects to devote myself, 200% to the Center.

The abuses and lack of cooperation from a mother Ministry, from those who felt that the Center overshadowed them, to the extent that they tried to discourage others from working with us, were just a bit much for my comfort. I did not lobby for the job in the first place and I was not going to lobby to keep it. I actually looked forward to leaving. But some people were going to exact their pound of flesh.

They organized some staff, mostly Northerners, invited the Press and set about to disgrace themselves. By mid afternoon, while the Heads of Departments were putting together the handover notes, they seized the keys to my official car, even with my personal items still inside. Threats began to fly. “That Ibo woman must” “we will disgrace her”. Their Chief organizer, the Acting DG, went about whipping up ethnic sentiments against me. Late 2015, the same officer had gone to the Center’s Mosque to ask for the issue of a Fatwa against me, claiming that I was working against the interest of the North. We nipped that in the bud by calling a townhall meeting and asking that proof be provided. The Fatwa was denied and peace reigned for a while.

Police was called in to the Center to escort me out and avoid blood shed as I disengaged. Eventually, in the midst of insults and name calling, with an angry baying crowd, some of whom were brought in from outside, I entered my official car and left. At no time during this melee did I threaten to sue Mr

President for asking me to disengage. Why would I? Is it not within his authority. Even if it were not, is the Center my personal property. I had done my best and if it was time to go, it was that simpleLife continues. I had a thriving career before my appointment. The Center did not make me. I have so much to do. I am a multitalented, multifaceted and multitasking child of God. By His grace, the future is greater. So what is the problem?

Let me say here that The Federal Government should really look into the Parastatals and take note of the fact that many people who work on them do not have the requisite qualification. Many contribute nothing and many see their job as personal entitlement. They are owed because Nigeria belongs to them and them alone. Somehow, these people were given the impression that they could attempt to do what they did to me and nothing would happen. That is very sad indeed. The Ministry also has a case to answer. They helped to creat that impression. A situation where the Ministry could invite a Management Staff to a trip abroad without informing the DG and the Staff would only inform her principal via txt message, from the Airport as she is leaving the country, creates an atmosphere of indiscipline and anything goes. The Ministry should restrain itself to its spelt out function and not undermine the authority of the DG.

Finally, I declare that I am a Nigerian citizen who should enjoy the rights attendant to that privileged. I am Onyigbo and proud of it. I respect myself and I love and respect all for who they are. We are all God’s children. No one has the right to insult or abuse me or deprive me of my rights. Nigeria will not hold unless and until we all come to that realization.