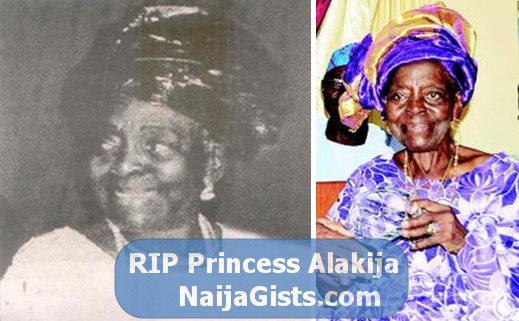 The daughter of late Oba Adesoji Aderemi is dead.

Her death was confirmed by her younger brother, Mr Adelowo Aderemi yesterday during a news briefing in the city of Ibadan.

According to Adelowo, his sister passed on to glory at UCH (University College Hospital) in Ibadan after a brief battle with an age related illness.

Princess Alakija was born on May 17, 1925, in Ile-Ife, Osun state, into one of the most ancient and distinguished of royal families in Nigeria.  An “authentic princess,” Mrs. Alakija received her early education at Aiyetoro Primary and Central Schools, Ile-Ife, from 1933 — 1937; and also at Kudeti Girls’ School, a private boarding primary school in Molete, Ibadan.

Alakija obtained her B.A Honours (History) at Westfield College, University of London, England, between 1946 and1950. She then proceeded to Oxford University, where she received a post – graduate Diploma in Education, 1950 – 1951. Alakija was a member of the G.D.H. Cole Group — a body well reputed for its intellectual and international activities.