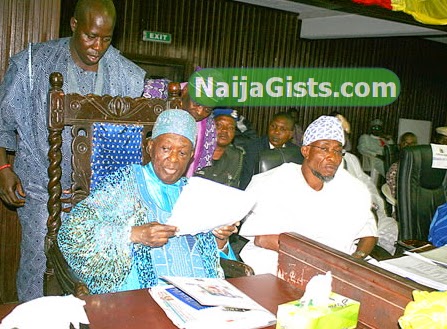 Oba Okunade Sijuwade, the Ooni of Ife has endorsed the present Osun state Governor Aregbesola for 2nd term in office.

This was made known during a courtesy visit the incumbent governor of Osun state paid to the royal father in Ile Ife today.

Oba Okunade Sijuwade said he decided to throw his support behind Aregbesola because of the projects he executed in Ile Ife during his regime.

The monarch added that there had not been a governor who demonstrated as much love for people of Ife as Aregbesola had done.

Sijuwade stated that Aregbesola merited the second term in office because the lofty achievements of his administration has never been experienced in the history of Ifeland and Osun state.

Ife-born Senator Iyiola Omisore, the running mate of Aregbesola is yet to receive a royal support from Ooni of Ife due to his party association.

Omisore is running on PDP platform.