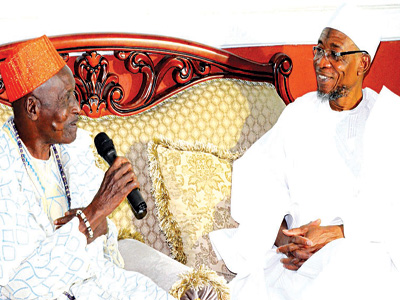 Ooni Of Ife’s Death To Be Announced After Corpse Arrives Nigeria From London, Chief Tell Aregbesola Sijuwade Is Still Alive

As we are all aware that the popular monarch of Ile Ife, Osun State, Oba Okunade Sijuwade has passed on to glory, but his chiefs are still insisting he is still alive.

“We were all shocked when we heard the rumour of baba’s death. If at all such an incident had occurred, the Royal Traditional Council of Ife would be the first to know and equally break the news to the entire public. “Sixteen of us are his chiefs and when he was travelling out, he didn’t look like he was going to die and should such a thing have happened to him, we would have been informed even before anyone would hear about it. We pray that Ooni Sijuade will live long in good health.

The chiefs are doing this in accordance to tradition.

There are protocols to follow before announcing a monarch’s death in Ile Ife.

Arrangement is being made to return Ooni’s body to Ile Ife from London.