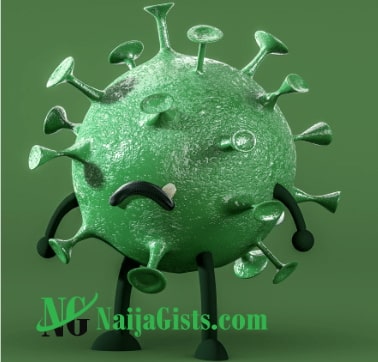 I hate you, I hate you. Don’t smile at me. You are a thief. You’ve stolen my time, my space, my peace, my joy and my freedom. I know you think you are smart. Of course you are. You’ve outsmarted China, America, India, Russia, Britain, Germany, France and every country in the world.

I hear your fear is the beginning of wisdom. You’ve created the record of being the fastest moving personality after light. My grandma is scared, so is my two year old daughter. My mom is shock, so is my wife, how you so little can make such a great impact.

I’ve been praying to have the same impact like you’ve had, to be noticed in every single country of the world. I like that side of you, but the side that sends spasms of fear is what I fear.

You are the world’s number one enemy. At least that’s what my government has told me. Jingles every ten minutes give people some information about you. Musicians are creating hits out of you. Comedians are helping people laugh using your name. No one wants to hang around you. But you happen to know how to force your way against all the stiff borders and boundaries that demarcates the nations of the earth.

The other day, my neighbors suspected you were hanging around me because I coughed and sneezed a little. You needed to see how everyone disappeared from me. These days, I dare not cough or get a fever else some persons will call the numbers of those who brag about been able to defeat you. If you see how sirens blow just because people hear the rumours of you been around, you really amaze me.

Mr Coro, How did you become this powerful overnight? Tell me because I need to know. I need to know how you killed Americans, Britons, the French, The Germans, The Chinese, the Arabs, all these people who claim to not be humans. And you did this without shooting a gun. The way you broke the Naija Jinx still amazes me. We had often thought that our strong black skin protected us from your kind of disease. You did not even care about how God loves Nigeria. You are wicked.

What amazes me is how you broke the world travelling record in less than four months. You travelled into almost every city or region in every country of the world starting from Wuhan China. As you travelled, you ensured you grounded every aircraft, airlines and airports. That’s strength.

Till today, some persons doubt your existence. They claim you are a big lie. Some claim that you target only the rich who can travel overseas. I don’t join them; I’m too smart for that. I know you are a spirit and that you travel via people’s saliva. I wonder at those who doubt you after the hundreds of thousands you have killed. They want you to kill them before they believe.

These days, I put on a mask everywhere I go. I don’t shake hands, I wash my hands every ten minutes, I have my hand sanitizer in my pocket just in case there is no water around, I don’t dare make the mistake of taking my hands to my nose or mouth. I’m cautious.

The last time I checked, global economy was at its lowest in the last one hundred years. Nigeria’s oil dependent economy was on ground zero. We were looking for buyers for our world-class oil. Mr. Coro, you are wicked.

You must tell me how you became the world’s best business man creating opportunities for people. You are changing the standard of living of people. People can produce alcohol based sanitizer and make millions; you’ve even created a market for nose masks. My sister-in-law is making thousands sewing nose masks in your name. Scientists are trying hard to produce drugs and vaccines in your name. Those developing test kits are enjoying life at the fullest. And doctors and nurses, they’ve seen the opportunity to ask for increase in their take home pay.

But you’ve made things worse for some people, people like me who depend on daily income, who can’t go out of their homes to fend for themselves because we were told to stay indoors as a means of fighting you. You make the poor even poorer while the rich make do with their huge savings in their bank accounts.

I need to tell you about palliatives. The government boasted about giving palliatives. They told us they were sending trailers of rice, beans, garri and wheat. It was major news, but guess what? I did not collect even one cup. Those the largess reached only received one cup of rice and one cup of garri. If you have a family of seven, how many persons will eat? I blame you because you should have created a way to get money out of the hands of the rich to give to the poor when you know how disastrous your impact can be.

Do you know how many people you have left unemployed or at least temporarily unemployed? The unemployment statistics is on the high. Those private schools are shut, meaning no pay for the teachers, children will become dull and difficult to teach when schools finally resume.

Mr. Coro, I like the fact that you’ve made people return to the farms. Those days, government would shout, go to the farms, go to farms, we all thought they were joking after-all we could import the food we needed. Now, everyone is scared to import food because of you. The rich and the poor, big and small, aunties and uncles, professors and laymen, everyone have become farmers because they are afraid of dying in your name.

I hear churches are not happy about the government stopping religious gatherings. Some pastors claim you have become a political tool for government officials to steal money. Some Muslim clerics even claim you are partial, you are been used to clear the Muslim population. I just laughed at them.

Nawa oh. There is something unique about you Mr Coro that gets everyone confused. You are like a big elephant whose parts feel differently. The people are blind so that when they touch you, they can’t really get the picture of who you are. They find one word to describe you, they say you are novel. But you know I know you. I am not bragging. I am not blind. I can see that you aren’t that image that our television screens promote. You aren’t the sell like virus. No! You are the spirit of a man.

So many conspiracy theories have travelled across the world about you. Donald Trump and Mr. Li won’t stop making us laugh. You’d hear bats, Wuhan lab, American soldiers who came to play games in Wuhan, Wuhan market, some even say 5G network.

They know nothing about you. They are just roaming on the surface finding physical clues to metaphysical actions. You are a beast, not a virus. You pretend to be too small but in reality you are so big, so big that you can instill fear, doubt, hunger, sickness and poverty when you are around.

You’ve spread your tentacles everywhere so that your stirrers now boast of how powerful you have become. But are you that powerful? No you aren’t. You aren’t as strong as you make people believe you are.

People doubt prophesies that were said about you many years ago. Your actions aren’t a sudden event, people saw when you would arrive the earth and they wrote it down in books. But no one cares to read. They are doubting Thomases doubting solutions that have been made available by nature. It is your trick to keep us under your control. I know.

Guess what? I know you can’t survive heat, you won’t dare. You won’t survive an onslaught of hot steam with ginger, lemongrass and lemons. But we’ve been fooled into thinking that the rubber stamped vaccine and drug with your name on it is all we need and we’ve waited forever to get them.

About the author: I am Ekekere Samuel, a writer and author of several books. ekekeresamuel@gmail.com www.facebook.com/naijasoars