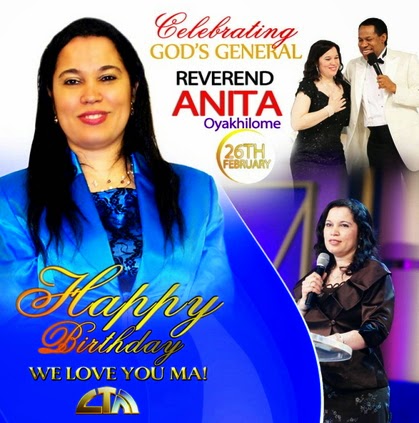 The man at the center of a messy divorce proceeding has spoken again few days after his wife says her decision to end their marriage is final.

According to close sources who intimated NaijaGists.com late last night, Pastor Chris allegedly told some key church leaders during a recent meeting that Anita Oyakhilome’s decision to file for divorce is because of power tussle between him and her.

Pastor Chris said when he started Christ Embassy, Anita wasn’t there and when he married her, he only invited her to come over to help him and not to take over from him but as time goes on, she became agitated when he made some key leadership decisions that affected her.

He also said a similar thing during a leadership meeting that held back in May.

Hear what Pastor Chris said about Anita back then:

“I am here for your concerns about the ongoing domestic issue with my wife and I know it affects you directly, being the ones under her leadership. This is not an organization or a political party, so it’s not a place for you to air your opinion or scrutinize what we do.
We had a vision, started and you joined us. If you don’t like what we do, you can get out. Churches where members air their views never grow. Some pastors’ wives think when they marry a pastor they are equal to the pastor.

My wife keeps friends who bring out the worst in her and help her see the worst in people instead of keeping friends that will help her vision especially as the wife of a global pastor like me.

Bitterness is prolonged and accumulated anger. My wife is always angry and bitter. Allegations are either false or twisted information. The current situation is not as a result of what I did or what I didn’t do.
I didn’t do anything to have caused an upheaval. You don’t join a woman to fight her husband. I’m not teaching you what is wrong, at least I have two girls who will one day marry and I want to them to enjoy it.

So back to the real gist….

Our source told us last night that the Pastor tried all his effort to woo back Anita by sending elders in the church to talk to her but Anita didn’t give them a chance to talk to her… she reportedly walked out on them.

This and many other arrogance-related behavioural patterns exhibited by the preacher’s wife forced Pastor Chris to keep quiet over the matter until some concerned church leaders challenged him.

As we speak now, the man of God is reportedly seeking the face of God on what steps to take about his marital life.

The source said it is obvious the man of God needs a wife after over one year of separation from his wife. #body no be firewood… May God help him.

If care is not taken, this cute Pastor may soon find himself a beautiful wife and the Oyinbo woman will come begging.. Hope it won’t be too late for her then.