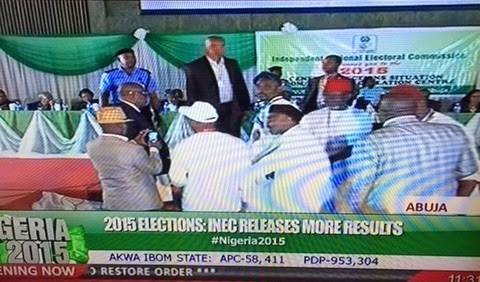 According to sources in Abuja, Ex-Niger Delta Minister, Godsday Orubebe and other PDP leaders tried to disrupt further announcement of Presidential. Election results by INEC over imminent defeat.

INEC had on Monday released results from 19 state which gave Buhari a lead with over 2 million votes and suddenly on Tuesday, new manipulate results arrived which put Buhari at .5million lead.

However, as the announcement of results was to continue at the International Conference Centre in Abuja on Tuesday, PDP officials stampeded the process accusing Mr. Jega of bias. For several minutes, they prevented the further announcement of results alleging among others, that Attahiru Jega, the INEC boss, refused to collect a petition they sent about the elections; and that he also gave unverified results to the APC.

Orubebe and other PDP big wigs have besieged the International Conference Center to disrupt the announcement of the final results.