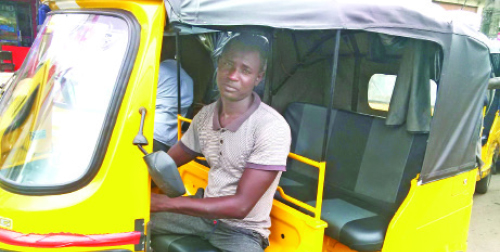 “If you are poor simply because you have one form of disability or the other, and sit out there bemoaning your fate, you are simply lazing about and ungrateful to God. You may not realise how lucky you are yet until you visit the hospital and see some people there whose cases are hopeless.” These are the shocking but thought-stirring words of Sulaimon Musa, a cripple who operates a commercial tricycle machine, popularly known as keke-marwa. He plies Ikeja, Oregun axis in Lagos with uncommon dexterity.

Call him a business man, an entrepreneur, or a transport operator, you may not be wrong for the young man sees himself as so. He believes that any profession that upholds and protects the dignity of man, is well worth engaging in. He says he is comfortable with any of it. He observes that if there is anything he loathes like a plague, it is alms begging. Exuding much confidence, Musa says though people say he is physically challenged, he does not see himself as so, insisting that disability exists only in the mind.

A moment with Musa would rekindle life virtues in anyone, as he speaks with wits. For instance, he says he is always contented with whatever he has, pointing out that a covetous person will never achieve any form of satisfactions whatsoever.

He maintains that he wants to use his youthful age to work and get established in life before he gets old.
Father of two, the Kano-born businessman as he prefers to call himself, refuses to be consigned to the sad side of life by his physical disability. He says although, he is not rich, has no car or house of his own, he sees himself as equal to his peers, having done the basic things any one of his age has ever achieved.

He says with his immediate family in Kano, his keke-marwa business, and his secondary school certificate, he is a fulfilled man. Musa insists he holds the key to his pride and happiness maintaining that as he remains unfazed about the way people around see him. He notes that although he does not have a large sum of money in his bank account, he is happy with his life, and believes he can attain any height he dreams about with hard work, patience and contentment.

At first, passengers, including this reporter never noticed that Musa was physically challenged person before boarding his Oregun-bound tricycle. Not until every one had left the loading bay. Then some discussion bothering on physical disability cropped up and begging was the subject. Then Musa, a fairly, outspoken person kicked in, decrying laziness, pointing out that alms begging could not help a society to grow.

He said: “Alms begging progressively destroys the society’s value system. It also destroys the psyche of the beggars themselves; in fact, it is a social menace.”

He is unhappy that some people ceaselessly complain about lack basic social need or their physical conditions, saying such people are ungrateful lots, as no man was created to have all that he wanted. “Nobody chooses where and how they were born; everyone remains a product of nature and God’s wishes,” he says, wondering why people boasted about their earthly possessions which they did not possess just because they were wise or special.

Hear him: “Whatever the situation is, someone should try and do something productive. Don’t go and steal or do rituals; just do any good work, and you would be somebody in life.

He likes me more than everyone else. That is my source of strength and encouragement; that is my hope as I go into any business, and I have been succeeding.
“When I first got to Lagos some five years ago, I began selling stationeries and handkerchiefs on Oba Akran Avenue. The returns were not much, but I managed myself, and was saving little by little from the meagre income. After a while I moved to have a small kiosk,” he recalled.

When Brig. Gen. Mohammed Buba Maruwa (rtd.), the then Military Administrator of Lagos State, introduced tricycle machines in the city, in the late 1990s, perhaps, little did he know that Musa would be one of people that would be using it eke out a living. later tricycles operation became a popular business more so when it replaced commercial motorcycles (okada) in some parts of the city. That was how a large number of people, including physically-challenged persons went into it.

Musa recalls that learning to ride keke always fascinated him and he didn’t waste time to learn it.
“When keke-maruwa was becoming popular, I asked a friend if I would be able to ride it because of my condition, and he told me I could. Since much of keke operation is done by hands, I instantly chose to go into it. Then he taught me how to ride it and in no time, I made rapid progress.

“Anytime my friend came to my area, he always gave me his keke, and I always it rode around. Progressively I began to go as far as Ikeja to Oregun, and then to Abule Egba. Then steadily, my confidence grew; I became better at it after he had trained and tested me. And that is how I graduated.

“Since I began riding this particular keke, I always paid N16,000 weekly to my principal. By the time I finish paying for this machine which was given to me on hire-purchase at the cost of N700,000, the tricycle would be mine,” he disclosed.

Musa says his disability has become an advantage of some sort to him because he does not experience regular disturbance from the police, who often see him as a ‘governments pikin.’

Recounting his childhood days, he regrets that all his life, he had never known to stand up on his own at least for once. “My legs have been like this since I knew myself to be a human being. In short, since my parents gave birth to me, I have always seen myself in this condition. When I asked my parents why I am like this, all they told me was that I was at some point given an injection and after that he could not stand up like other children. I have never known to stand the way you are standing or walk the way you do at least for once in my life. I used to crawl on the floor with my hands and kneel while I was growing up. But now, I use a skit board with tyres under it to roll around; it makes my movement a lot easier. They gave us the board at our club.”

Musa who is in his late 20s, restates that he is not resting on oars and will never do that. He discloses that he always keeps thinking about extra businesses to engage himself in which will fetch him more income. He equally expresses his desires for better education, recalling that if he gets sponsorship opportunity, he will not hesitate to grab it. “If I see a job that promises better income, I will not be afraid to it. I am looking at doing more businesses because I know a lot about business. I want to see what I will do next to be able to cater for my family back at home.

“However, I wish I would go for more education if only I can get sponsorship. Supposing my parents could afford to train me in school beyond where I stopped, I could have by now, bagged a degree and the gone ahead to do my Master’s degree. But I am not complaining at all. I remain grateful to them for what I am now. With my secondary education and enterprising ability, I know I would make it some day,” he says, sounding very optimistic.

[By Ola Kehinde-Balogun, The Sun]