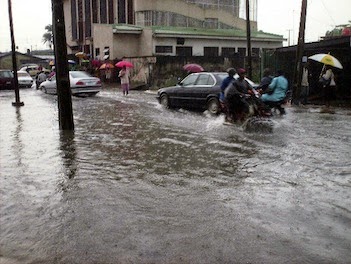 Lagos state was brought to a standstill today following an early morning heavy downpour that started around 5:15 am.

The rainfall paralysed activities in Lagos today due to traffic gridlock caused by flooding.

Motorists and commuters were trapped in traffic for several hours in most parts of the city. In some instances, a journey of ten minutes took about two hours as major junctions in the metropolis were blocked by desperate motorists struggling for right of way. Matters were made worse by the absence of traffic officials at some major junctions.

Most parts of the state became flooded following the rainfall and left commuters and school children stranded at various bus stops across the state.

Continue Reading
You may also like...
Related Topics:lagos, nigeria, rainfall