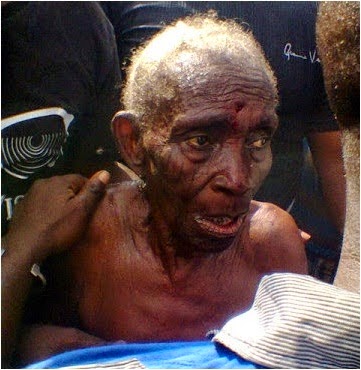 On Wednesday, an old woman escaped being killed by eyewitnesses who saw her as she was being transformed into a human being from bird yesterday in Lagos state Nigeria.

An eyewitness disclosed that a flying bird lost control in Ajegunle on Wednesday and fell down.

Within minutes, the black bird that sustained head injury turned into an old woman.

Upon hearing the story, area residents gathered around the alleged witch to lynch her.

An eyewitness who identified himself as Chike said he was infront of his compound with his girlfriend when they suddenly saw 3 big black girls flying.

Chike said the birds suddenly engaged themselves in a fight and as he was watching, one of the black birds suddenly fell into a moving van while the other 2 flew away.

The bird that fell suddenly turned into an old woman.

Ajegunle area residents said they were surprised when they suddenly saw the bird that turned into a woman rolling on the road with blood gushing out from her forehead.

During interrogation, the woman allegedly confessed that she’ a confused witch coming from an overnight meeting in Lagos enroute to Ibadan with two other witches.

She said they missed their way while returning home and started hovering in the area till daybreak.

The alleged witch woman claimed she gave up and dropped down because she’s tired of flying.

She has been taken to a local police station in the area to avoid lynching.

Power must have passed power in that area….