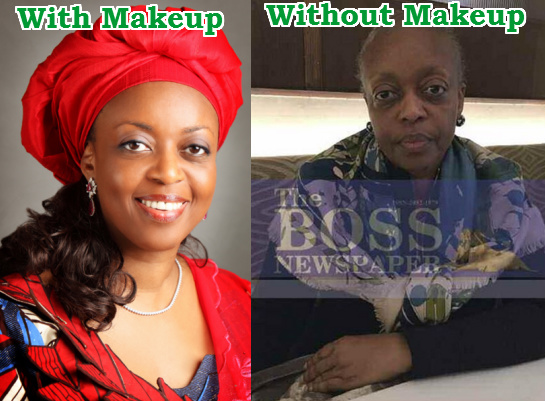 In an apparent bid to seek sympathy from Nigerians, Diezani told Dele Momodu that she didn’t steal anything from Nigeria.

Hear what some Nigerians are saying about Diezani’s latest photo:

donkay_ig@delemomoduovation I hope this ur story is not to get us pity!!! and I’m sad if u r trying to paint her good??? she’s a stupid leader!!! when the heat was up, she could not clear her name about stealing any billions of dollars, now that her boss is off power, she wanna play clean??? if I was a secondary school teacher and I have 50,000 naira of the school money is stolen, I can’t just face pple and press saying I did not steal the money. I should be able to defend the money and say the pure facts. if a higher personnel is involve I should be able to defend myself saying my boss directed the money for the upkeep of bla bla bla. not just come and use mouth and say IM NOT A THIEF, this are billions of dollars not 50naira or kobo. this pple just take Nigerians for granted!! we no fools!! if she did not steal it, common put up ur papers and do the mathematics of all the funds that were received and what they were used for. there is a possibility she’s not a thief but the fact u r not plain with Nigerians, ull be considered as a thief and a big thief!! #idiot

pure5712 How come your mother Mrs Agama acquire a property worth £3M in expensive Central London,UK? Is this acquisition gotten out of her hard work? Honest means of livelihood? Many politicians are guilty of similar alleged crime no doubt while many poor Nigerians have died needlessly because of poverty yet some politicians with unimaginable wealth are thriving to greater heights along with their extended families in the midst of this messy situation in our country. It is indeed a sad state of affairs. Nonetheless, I wish you a speedy recovery & God’s strength to face your ordeal & clear your name.
sisibiolaSeriously! Nigerians should not be fooled. Uncle Alams became a woman… Let’s forget sympathy. She should be made to face the law.

adesanmifunmi I pray God heal her. My pple, cancer is deadly,lets do more on prevention,early detection and give more to help recovery. Health sector needs more research on cures.
buby_oPls remind us, just remind us of the things that went right!
segunshittu@djbiggles_62

queenteewii Sick or not!!! Thousands of Nigerians die of hunger every day, etc.. We don’t care if she is silver spoon bred or gold spoon bred!! We don’t give a hoot! She should be jailed!! Meanwhile, why is she receiving treatment in Europe!? No good hospitals in Nigeria Whose fault? Ndi ara
everest_cedargrowthconsultNa wa oo politician a are actors.thia is potoshop just to run away from her nonsense. Justice will take its course.

richlyonome Oga dele I dare u to put her medical results online confirming she sick from what you guys are claiming, am sure Nigerians won’t buy into this cheap public sympathy, sick or not she’s facing persecution cos she stole from Nigeria, no mercy for all of them, it’s time we put a stop to free will stealing, you shouldn’t b running this cheap sympathy plssss, you are far respected than this make up look face to show us a fake sick person.
oobandyDo u think Ovation ran this story for free?There is nothing free for communication industry.The thief just wanted to get her message out and she just paid ovation has a vehicle to do that

woome001I will never believe this woman. Trust me this is makeup….. #bringbackourmoney

oluwadamilotun She is a lier with collabo with dele momodu.

sheedah_deeva That is what she is doing looking for ur compassion, instead of us to be asking for our rights we will start pitying her, when did the cancer start? Why didn’t we know about it while she was in government ? Why is she coming out now like this? If you see real cancer patient accept when they re in hospital they don’t go about looking like this, pls don’t be deceived.

kaxqua She should not die oooo, too much of our money on her neck

mayflysoi She’s a bloody sucking liar, even if she has been working for 100 years in that company there’s no way she will come across that kind of money 12 billion dollars Na beans money?
mayflysoi The leadership of the county has lost its priority … Thier only only achievement is 3rd mainland bridge and eradication of Ebola

muhasco She reminds me of the legend late Dora, its a terrible thing, she is really passing through hard time.

philanthropezy God I pray for your healing power to heal this daughter of yours. The power that sustains the earth in space will sustain your life. Amen Wish you quick recovery in Jesus name.

sadiqbolos75 She is normal & ok jst a disguise for nt having make-up to show dt she’s sick.
suregod_surebabe You did your job and compensated yourself with the amount of money you think is commensurate to the job you did????? Mtscheeeew

Alison-Madueke, who is reportedly undergoing treatment for breast cancer, in London is under investigation by the United Kingdom’s National Crime Agency for allegations of bribery and money laundering.

She had been accused of spending billions of naira as minister to maintain private jets and alleged to be responsible for $20bn in missing funds, though she has repeatedly denied the allegations.

Alison Madueke may be seeking sympathy but for now, let’s wish her quick recovery.