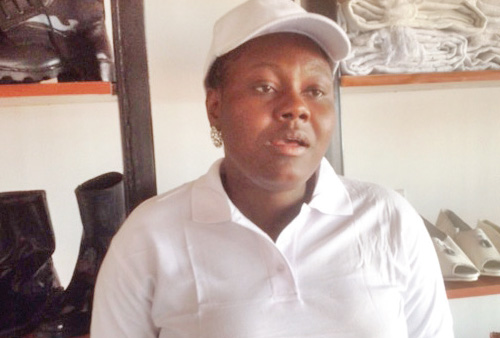 Onome Denedo, a graduate of Sociology at Delta State University in Abraka has found herself in a trade dominated by men

She is the founder of a Footwear centre in Aniocha North LGA of the state.

On how her parents see her career choice, Miss Deneoo said:

“It was a huge disappointment to my dad, a very huge one because he was nagging and constantly telling me that I needed to get a first class. It was impos­sible for me to graduate in first class because of financial constraints and my divided attention. While I was in school, I was learning. Although I was able to come out as the best in my department as at the time I graduated but it was very an­noying to my dad because I could not use the certificate. I came back with some­thing good for him but I could not use it. It was very frustrating. He was angry with me and we did not communicate for over a year but my mum was talking to me. He was so surprised one day that I had to call him from Italy. He screamed “what hap­pened? What are you doing there?” I told him that it was the shoe business which he did not like that brought me to Italy. Then the story changed from the bad girl who refused to further her education. He tried so much to get appointment for me with some banks but I preferred being a cobbler.”