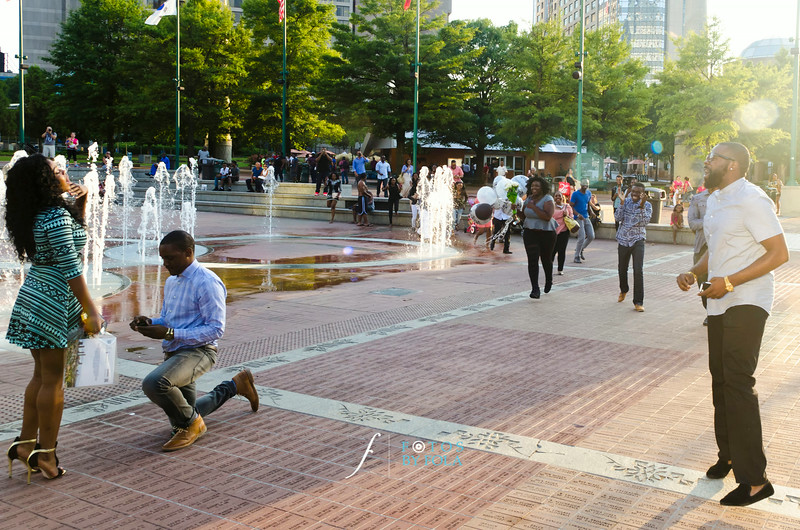 The guy named Samuel recently popped the question to his lover in downtown Atlanta.

Read their proposal story below:

“How God intertwined our paths”, by the bride Bukky

When I was a senior in high school my older sister asked me if I was going to prom and I said no because I had no date :( lol. So she called her friend Joseph (Samuel’s older brother) and asked if his little brother was seeing anyone, and if he wasn’t would he ask me to prom. I was HORRIFIED!

I didn’t want him thinking I was some loser who couldn’t get a prom date lol! So when he called and asked me I told him that I would think about it….I figured he would give up and not call again…but he did! So we talked almost every day until prom night. So he took me to prom and we danced the night away lol. Afterwards my sis said she was going to drop him and home and i was going to a friend’s house so we said our good-byes. I thought I wouldn’t hear from him or talk to him again because all he promised to do was take me to prom.

But early the next morning he text me that he spent the night at my house because no one was home to open the door at his house lol. So I rushed home to see him again before he left (Drove on the highway for the first time for him, lol). So we said our good-byes (again)…..and he never stopped calling :) Like any relationship, especially one started so young, we went through our growing pains but God ALWAYS brought us back together stronger and closer than before.

The Proposal!
Samuel: Planning this wonderful day all began when I approached Afolabi (Fotos by Fola) about my plans. Knowing he’s been doing this kind of stuff for a long time, he was the first person that came to mind. We sat down I told him I was going to propose soon, the ideas I had in mind and would like for him to be a part of it… I wanted something memorable, not too over the top but at the same time not a cliché type proposal.
Since my bride-to-be and I met in Atlanta and this has been our home for years, I thought I needed do something that ties in with the city we love so much. An idea finally stuck when she told me she found out that there’s a Ferris wheel downtown and she would love to go (keep in mind this was months ago). I didn’t want to take her on it and then use that that again for the proposal so I kept putting it off and coming up with excuse upon excuse every time she reminded me about it. What made it worse was we would drive through downtown and she’ll see it and be like, “you still haven’t taken me on the Ferris wheel but it’s cool” making me feel guilty each time.

So after talking to Afolabi, we planned to go downtown a couple of days later to make sure everything worked out precisely. We get there and before we knew it rain started pouring, that’s all it took to start second guessing the entire thing. I said maybe it’s a sign that this proposal plan won’t work but Afolabi and my close friend (Tobi) convinced me it will work out perfectly. Next step was getting the ring. I knew exactly what she liked since we’ve been ring shopping for months. The following week I went with her older brother (Lekan) to go buy the ring.

On our way there I told him what I was getting ready to do and how nervous I was… he could see it all over my face lol. The following day I told her I got some free tickets at work for the Ferris wheel and we can finally go… She was so excited!

I was like hey we can go before we head to your friend’s (Kemi) birthday dinner since it’s close to downtown and she agreed to it (Kemi was already in on it too). I had to work some music into my plans so I called up my friend Ebi (DJ Ecool) and asked him if he was available on that day to play one of the songs we’ve loved since we started dating. A couple of days later it was time to have “The talk” with Bukky’s mom (Daddy is resting in peace). Scheduling that was already proving to be an issue with mommy being home and Bukky being at home as well. Finally, with Lekan’s help I got mommy to come over to my place. I explained to her my plans and asked for her blessing which she gladly gave along with some really important advice I took to heart.
August 15th, 2014 finally arrived. I get to work and ALL I could think about was the proposal that evening. For everything to work out perfectly as planned timing was really important. Earlier in the week Lekan sent out texts to friends and family I knew she would love to witness this day. After work I got home, she came over to pick me up and we headed to Skyview. The whole trip there I tried to remain as calm as possible reciting my speech in my head at the same time checking in with Tobi and Lekan to see if everyone had arrived. She could tell something was wrong but I played it off and said I had a long day at work and was tired. We finally get there and park the car. I immediately started looking around hoping not to run into anyone I invited. Thank God that didn’t happen. We got on the ride and it was really awesome!

So I have always loved ferris wheels, so i have been bugging him for months to take me on the Atlanta Skyview (a ferris wheel in downtown Atlanta). He finally agreed to take me on friday and then we planned to head to a friend’s birthday dinner afterwards. On our way to Skyview i noticed that he was acting weird….quiet, not really paying attention, etc. I asked what was wrong and he said he was tired so i let it go. We went on the ferris wheel as planned (LOVED IT! lol)

See photos from the proposal below: 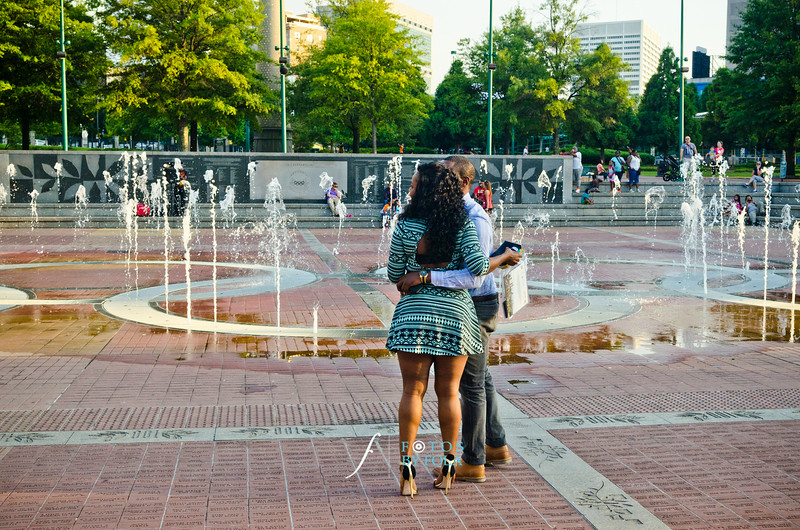 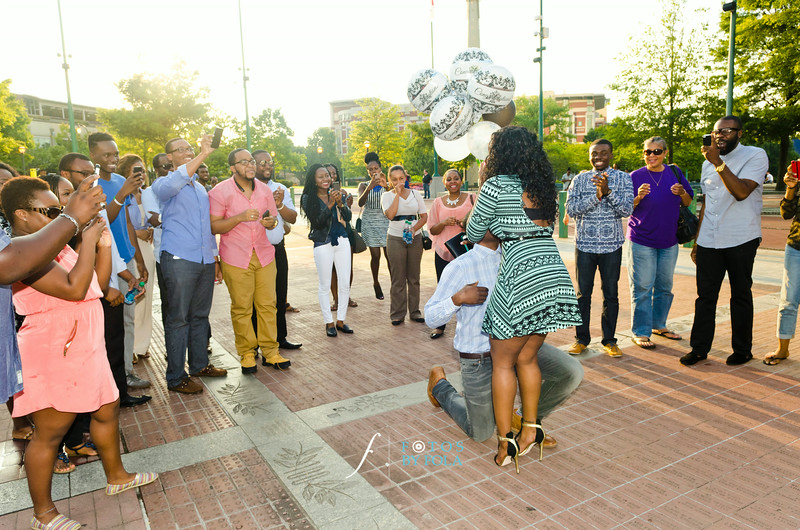 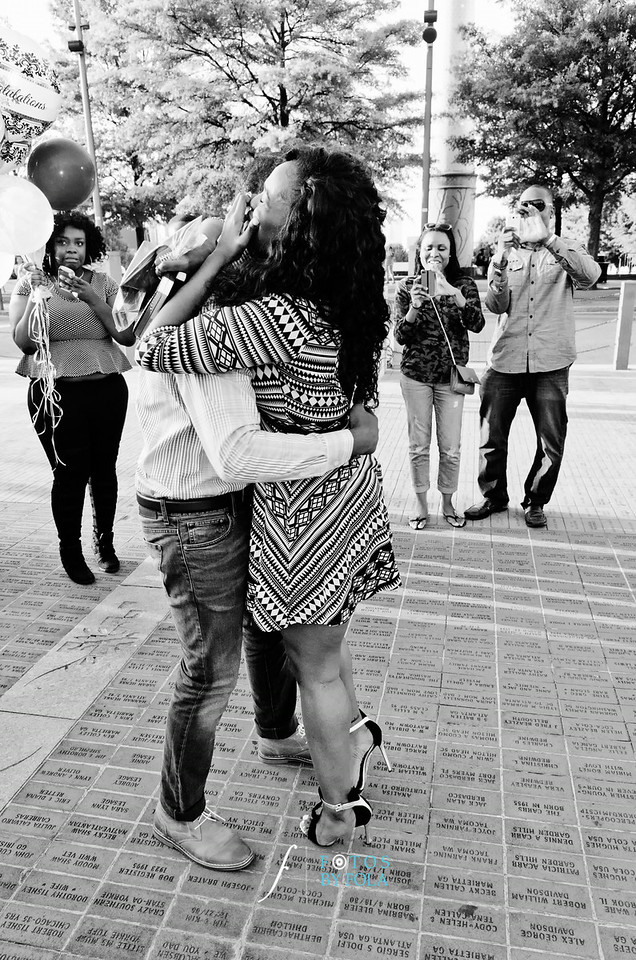 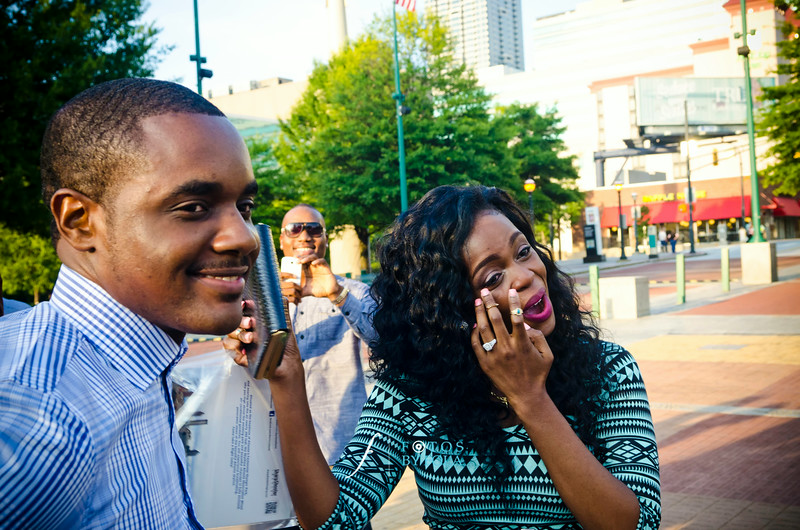 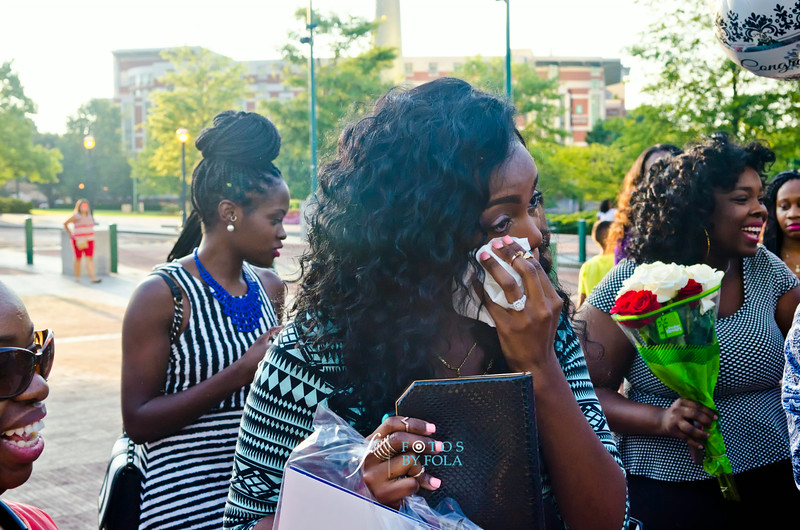 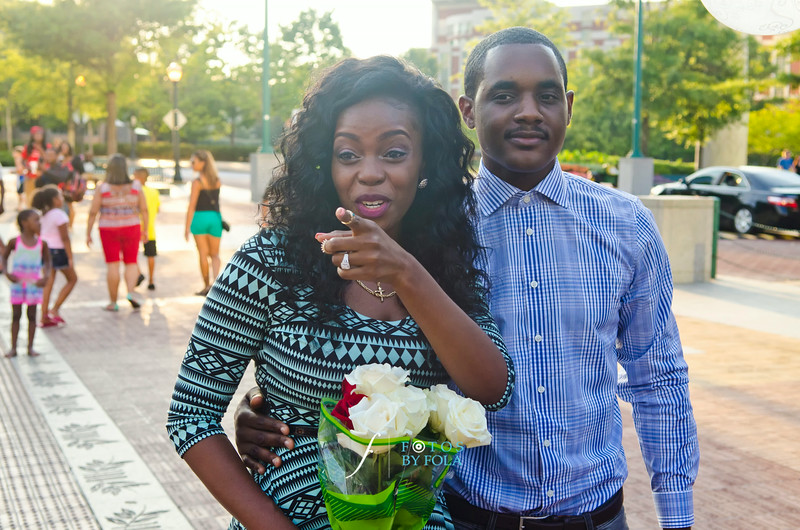 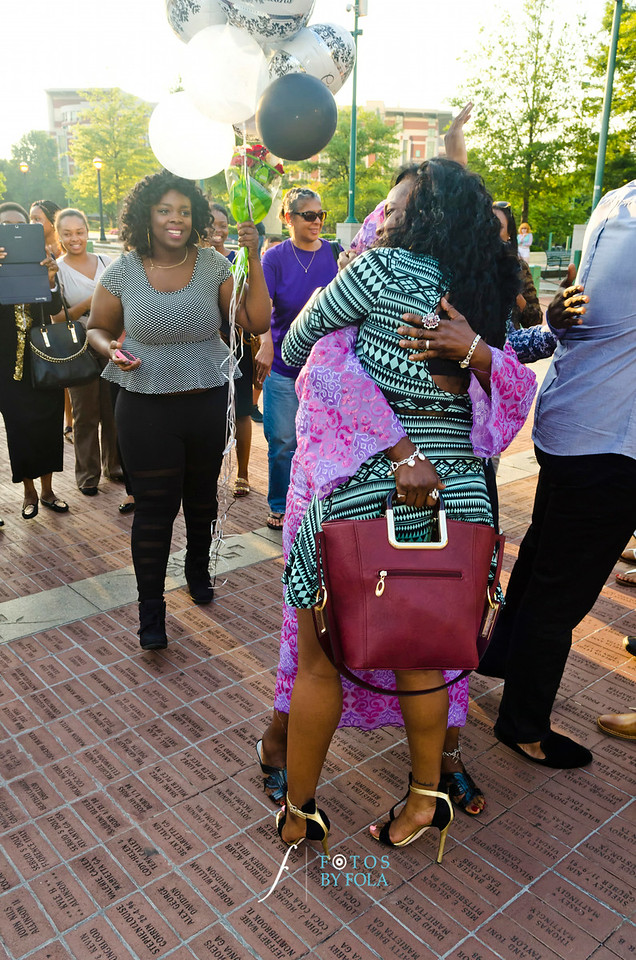 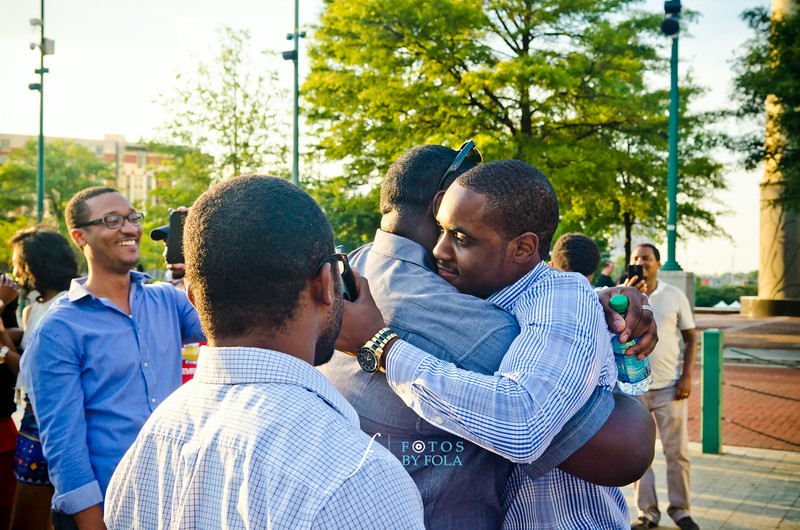 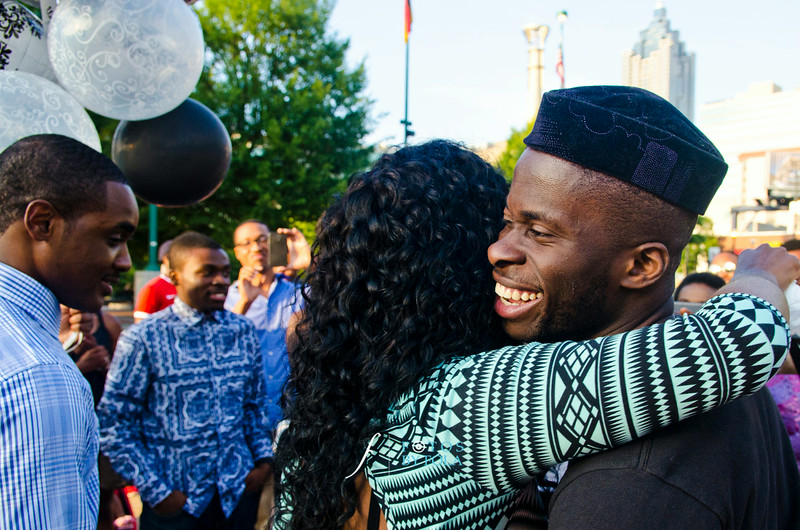 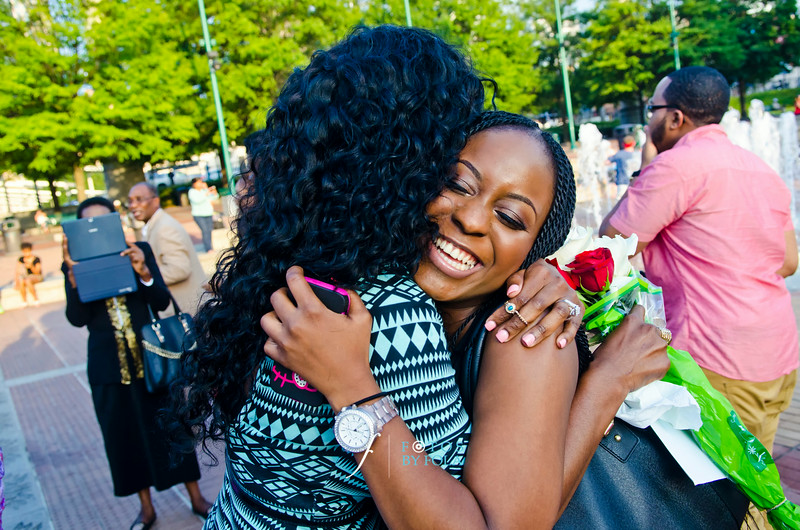 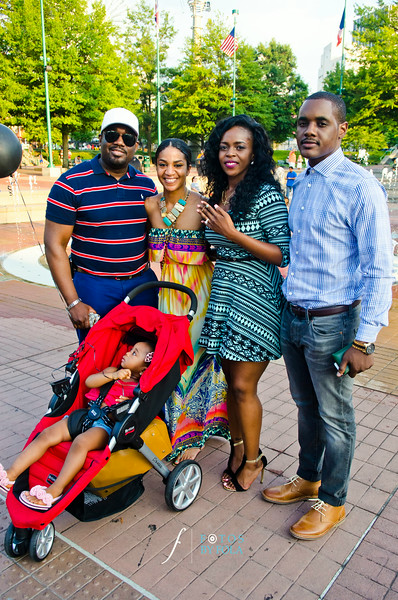 Lovely! Congrats to them.