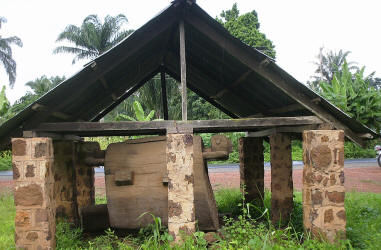 A zealous evangelist has destroyed the shrine of Ikoro in Uga town, Anambra.

According to NaijaGists.com, the man of God was invited to conduct a liberation service in the town.

After spiritual cleaning, he moved from shrine to shrine to eliminate traces of evil in the town. 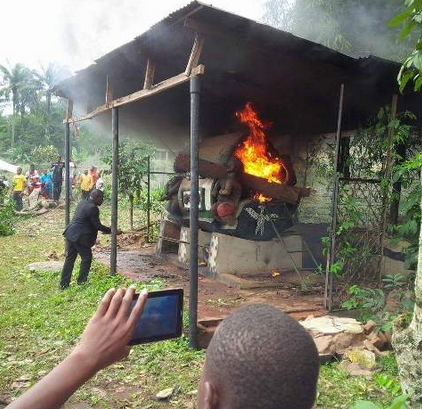 Ikoro aka Slit drum is a traditional medium of communication in Igboland. The beating of the Ikoro signifies many things to the Igbo people every sound is peculiar to the beat. It may signify a call for war, an emergency, a call to duty or to announce the death of a prominent member of the community among others.

At the sound of the Ikoro, all members of the community are expected to respond immediately by coming out to the village square where the specific reason for the beating is relayed to the people. It is considered a cultural abnormal for the Ikoro to be sounded without due cause. This means its expression is bound by mores that gives it a cultural uniqueness which makes the Ikoro not only a means of communication but also an instrument of expressing cultural unity and a sense of purpose among the Igbo people of Nigeria.

Our source said the Ikoro shrine at Uga has been sounding without due cause in the past 3 months and has brought unrest to the community.

Ikoro Shrine keepers need to provide blood of virgins and human skulls yearly to appease the gods behind it.

This is why they called the man of God to help them get rid of it.

Ikoro worshippers are still waiting to hear the death of the evangelist as they believe whoever committed such sacrilege will die within 24 hours.

The shrine was burnt over the weekend, over 6 days after, the evangelist is still alive. #power pass power