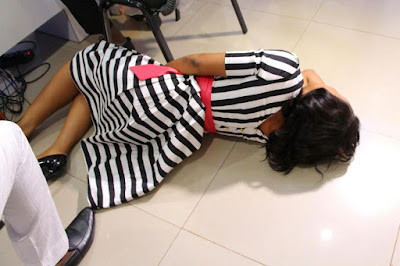 June 5, 2015 – Pictures & Video: The Romantic Birthday Marriage Proposal That Got A Lady Rolling On The Floor

Meet Daniel Olatunde and his wife to be Taiye Legunsen.

She got a surprise wedding proposal on her birthday, Wednesday June 3rd, 2015. Taiye was so overwhelmed with joy and didn’t know when she started rolling on the floor. 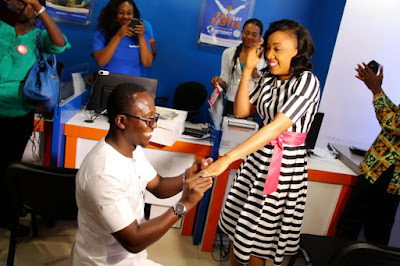 Watch the proposal video below:

Daniel:
“It started last year October when I went to her office to purchase device, yes I was attracted to her but she attended to me professionally with a straight face.

She didn’t conclude my transaction and directed me to another desk where it would be done, but in my mind I wanted her to complete the transaction. Anyways I finished and left.

Fast forward to the 18th February, this year, I was there again and she attended to me but my card didn’t swipe on POS. So she offered that I could drive down to get cash from an ATM and pay via cash instead.

I asked her how she knew I had a car and she said already saw the key. After withdrawing the cash from the ATM, I returned and found her attending to someone else, so I waited till she attended to me.

I didn’t have any intention that moment but she was so pleasant and I requested for her name and surname after which I got to sit back to request for her phone number.

I called her after 3 days but she was rushing somewhere that morning and I promised to call back but when I was free to call, i felt it was late. I had to respect her privacy, knowing the fact that it is out of place to call a lady after 8:30pm.

However, she called me 2 days later and said I didn’t call as promised and I apologized.

That night I called before 10pm and somehow, we were on the phone till about 1am which affected her sleep pattern cos we continued gisting till late everyday after work.

We had our first date one evening after work and it was a pleasant outing at a garden. I found her to be a wonderful woman, strict, strong willed, a no nonsense lady, I call her a perfectionist.

And that is how I decided to be her shuffer after work which gives me pleasure and to have a cap of our daily events. That is how we got closer daily.

A few months I decided to make her my woman!

It was her birthday, June 3rd and I felt the best gift I could give her was a surprise proposal. I showed up at her office, she was glad cos she felt it was a surrise visit, music was being played and peeps came in with me.

She was stunned when i went on my knees to propose to her!

She said YES but not before the mild drama that played out :).

I can’t wait to have her by my side forever… I love her so much.