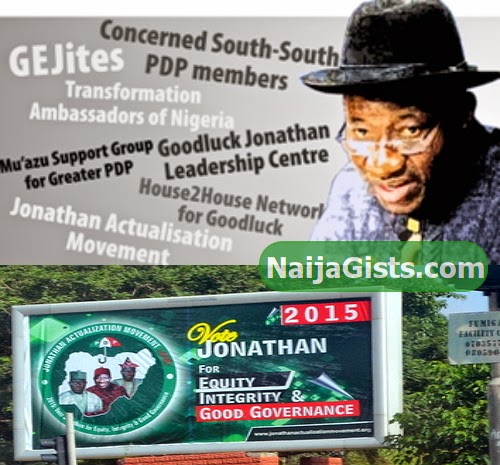 It was not surprising to me when I came across it in the media that President Jonathan has traveled on a political pilgrimage to Israel to pray for Nigeria. He went there with about 11 notable figures.

The name that quickly caught my eyes was that of Ayo Oristejafor, CAN President. I taught it was another Ayo of a different CAN. But then I saw the face of Oristejafor that I know. Then that was when I began to read the story.

In my view, the President was on a political pilgrimage to great Natanyahu, the Knesst and the MOSAD.

Later in the day, I saw President Jonathan greeting Natanyahu. Also, the President travel to Israel only to appease Nigerian Christians – who he thinks will vote for him no matter what. This is because, in Nigeria, everything is politicized unnecessarily. The President was also on his pilgrimage to allow police to handle Tambuwal as he knows that. Tambuwal has finalized his plans to defect to the APC. The logic was, Jonathan wanted to allow the party leaders to prevail upon Tambuwal not to defect, if he defects,, then the police will be made to handle him. Unfortunately for the President, Tambuwal delayed for two days.
Party primaries will soon be concluded. The President has already made up his mind that he will be standing for 2015 election. The President has promised free and fair election, but from the start up, the PDP concluded that President Jonathan will be adopted as the sole candidate. This shows that their is no internal democracy in the ruling party.

In a country that there are checks and balances, the President is answerable to the people. Also, the President fears and respects the court of public opinion.

Why will Jonathan travel with Oristejafor? Why now? Why Israel? The President should have distanced himself from Oristejafor till he is proved not guilty by the committee set up by the President. This among many other things are among the things increasing suspicion and black painting of the Nigerian President and Nigerian nation.

What happened in Ethiopia at the African Union summit was embarrassing. Likewise in Australia in the Common wealth meeting. There is the need for competent advisers, aides to every serving Nigerian President, they should be discharging their responsibility without fear and favor. They should advise the President on what to say, what to do, when to do it, how to do it, and when not to do it/ say it. This is because, the Presidency is an institution not a personality.

Nigerians should rise and demand the complete and total closure of the so called appendage of power, that is the office of the first lady. The unconstitutional office is costing Nigeria a lot. I remember when the first lady wanted to construct a 4 billion naira office headquarters of the African first ladies peace mission in Abuja. The land she wanted to build the office was said to be that of the immediate former First Lady. Later the court settled the case in favor of the former first lady.

According to our annual budget, the Presidency is spending over 1.6 billion on internal and external travels. There are about 11 planes in the Presidential fleet. There was a time when President Jonathan was in France, the Vice President in Gambia – to attend the country’s independent anniversary, the first lady was also in South Korea attending the world first ladies forum, and Secretary to the federal government went to Sokoto. Since there are enough planes, they travel everywhere enjoying themselves.

Jonathan is a wasteful spender, his advisers are an embarrassment to Nigeria, this political excess must stop.
[Comrade Abdulbaqi Aliyu Jari, Usmanu Danfodiyo University, 1total.wordpress.com]